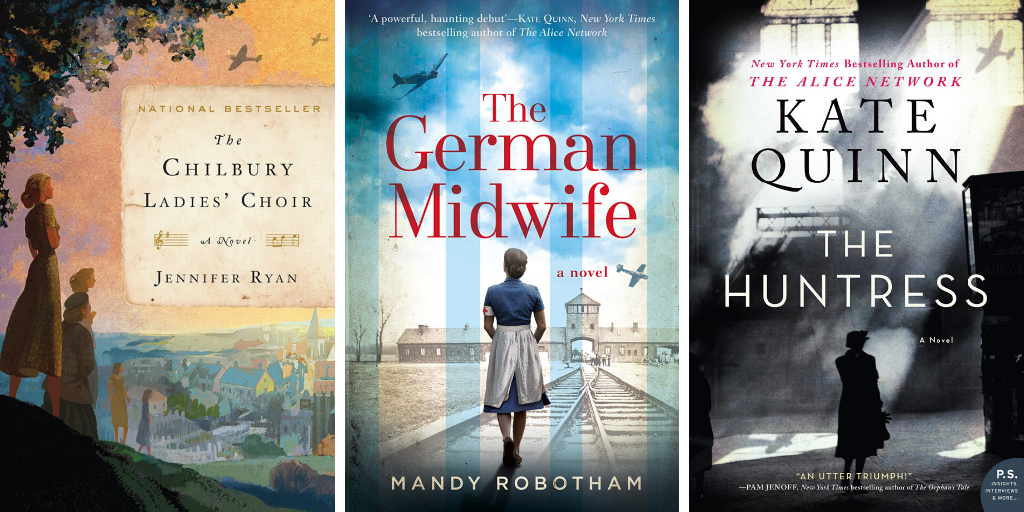 Heartache, homesickness, horror, and hope all intermingle in stories of women in war. Here, Darcy shares some of her favourite selections from our collection.

Rose Under Fire by Elizabeth Wein

In the dying days of WWII, a young American pilot, Rose Justice, transports planes to bases in England and occupied France. On one mission, she is forced down and captured by the Gestapo and sent to Ravensbruck, the notorious women’s prison camp. There she meets a variety of inmates including the “rabbits”—the Polish women and girls who are used as live guinea pigs in horrendous medical experiments. Rose joins a ragtag group of women; Lisette, a former French novelist; Irina, a Russian “Night Witch”; and Roza, one of the Polish “rabbits” who all struggle to survive in unbelievable circumstances. Rose uses the poetry of Edna St. Vincent Millay to help bolster the spirits of the women and bring some light and beauty to their existence. The story weaves together the tales of these remarkable women, who learn to trust one another, as they grow to understand that family is so much more than blood or biology.

The German Midwife by Mandy Robothom

Anke, a German midwife, is taken from the horror of the Ravensbruck prison camp to the no less dangerous world of the Nazi high command at Hitler’s mountain top retreat, the Eagle’s Nest, high in the Austrian Alps. There she must minister to Hitler’s pregnant mistress, Eva Braun. The author is a trained midwife and her knowledge infuses the story with authenticity. The book is riveting in its attention to historical detail. The scenes where Jewish women must bargain for a few minutes of time with their newborns, before they are separated and the babies murdered, are horrific in their intensity. But, in the midst of darkness, there is always hope, and Anke finds love and an ally in the unlikely form of an SS officer. It's a gripping, harrowing read that is compelling and intense.

The Lost Girls of Paris by Pam Jenoff

Part mystery, part spy thriller, part romance, the story begins in New York in 1946.  Rushing through Grand Central Station, Grace Healey finds a seemingly abandoned suitcase with photographs of 12 unknown young women—who are they, and what are their stories? Grace gradually learns that the suitcase belonged to Eleanor Trigg, a British leader of a female spy network. She oversaw training and then sent the girls into Occupied France during WWII.​ Inspired by true events it is a mesmerizing tale of sisterhood and courage in the face of frightening odds.

The Huntress by Kate Quinn

Nina, a Russian “Night Witch”, is haunted by her failure to protect her companion, a downed RAF pilot, killed by an infamous Nazi murderess. Together with his brother, a war journalist, they search for the woman known as the Huntress. Their search takes them from Vienna, to London to postwar Boston. There, they meet Jordan McBride, who is at first delighted that her father has found happiness again with his lovely bride, a German war widow. But soon Jordan begins to wonder if this woman is hiding a terrible secret. Perhaps the war isn’t really over for any of them.

Juliet Ashton, a young British writer, receives a letter from a farmer on the island of Guernsey after he finds her address in a book that once belonged to her. She later muses; “I wonder how the book got to Guernsey? Perhaps there is some sort of secret homing instinct in books that brings them to their perfect readers.” There begins a heartwarming journey of friendship, love and the power of books. Told in the form of letters, the novel is full of humour and sometimes tears, but above all hope.

Five memorable women defy the order of the local Bishop to disband the village choir, as all of the men are away fighting. Instead, they form the Chilbury Ladies Choir. Music and song provide the threads by which they weave bonds of strength and compassion for themselves and one another. Told in the form of letters the stories show suspense, heartbreak, budding romance and life and death struggles that were all too common even on the home front during the Blitz. For fans of The Guernsey Literary and Potato Peel Pie Society, it is a delight!

Do you have some favourite historical fiction titles? Suggest them in the comments!