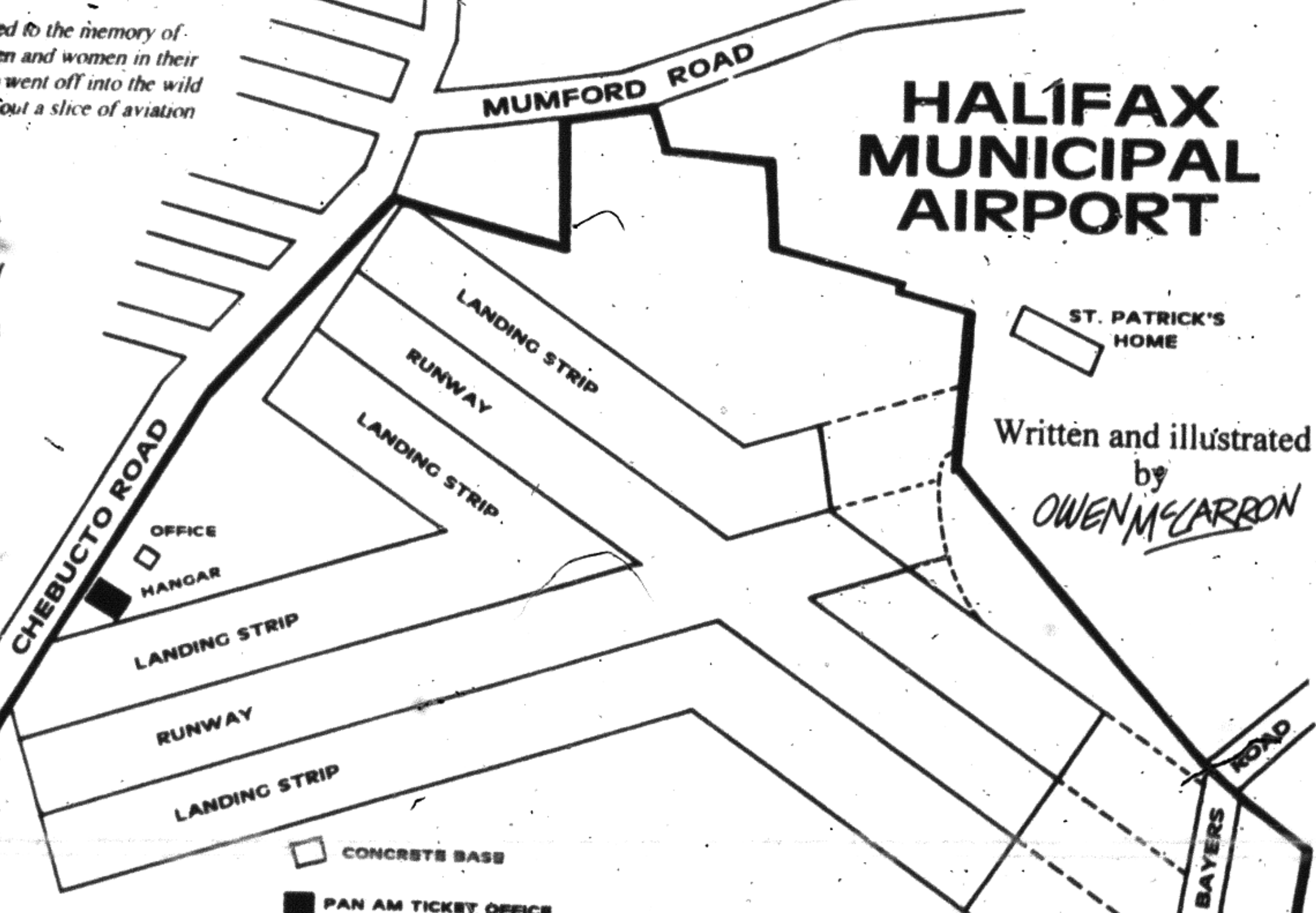 It’s hard to imagine boggy woodland, let alone a series of farms, being a prominent feature in West End Halifax, but for many years the property referred to as “Bluehill” was just that: forest and field. “Bluehill” was a 60-acre plot of land that stretched from Mumford Road to Connaught (once known as Kline Street), and from Chebucto to Bayers Road. Perhaps a seemingly inconsequential piece of property, “Bluehill” was destined for a higher purpose: Halifax’s first airport.

People had been talking about building an airfield in Halifax as far back as 1919, but it would take almost ten years for the idea to get off the ground. In the summer of 1928, the Halifax Board of Trade and the Aviation Committee of the Halifax City Council began to search for a suitable location. Many proposals were put forward—including one that suggested the flattening Citadel Hill—but in the autumn the group unanimously voted in favour of the development of the "Bluehill" property, as it seemed to be the most economical option. Not everyone was in favour of the development; it was an expensive project, and some people did not think it was a good use of their tax dollars. However, despite some pushback, construction began on May 20, 1930.

It took five months of careful construction before the first plane touched down at the yet unfinished airport. On September 7, 1930, Major T. H. Tudhope, from Ottawa’s Civil Aviation Department, landed his Stearman bi-plane, and though work was not yet complete, reports say he was very pleased with the progress that was being made. The Halifax Municipal Airport was finished in December at a cost of approximately $225,000. By January 1931, after receiving a temporary operations licence from the Department of National Defence, the city was looking for groups to submit tenders to operate the facility. It wasn’t until March that an agreement was met with the Halifax Aero Club; the club would receive $3,000 a year to run the airport, and Captain Donald W. Saunders, who served with the Royal Flying Corps in World War One, would serve as the manager of the site, as well as a flying instructor.

Open for take-off and landing

The grand opening of the airport took place on Friday, August 28, 1931 at 4:30pm. Planes were scheduled to conduct a pageant over the airport, which included the Siskin fighters of the Canadian Air Force, acrobatics displays, a demonstration of the autogyro, a parachute jump and aerial fireworks. The occasion was also celebrated with music from The Princess Louise Fusiliers band. In the promotion of the event, The Chronicle Herald stated that “…the highly strategic position that the capital city occupies on the air map of the world will be emphasized.”

The airport’s first passenger plane was a Fairchild 71 monoplane. The Fairchild 71 was first introduced in 1928. It could fly at a top speed of 138mph (222kmh) and had room for six passengers plus the pilot. The plane made the flight to from Halifax to Saint John and back at a cost of $20 each way. For a time, Pan American Airways would have a daily flight from Halifax to Boston. The cost one way was $35. In April of 1939, the Halifax Aero Club and the Department of Defence joined together to train recruits for the Royal Canadian Air Force. Their training included blind flying, forced landings, and aerobatics. The Municipal Airport even attracted some celebrities in its time, including helicopter pilot Igor Sikorsky, and Amelia Earhart.

A particularly busy time for the airport was during the Moose River mine disaster of 1936, when a gold mine collapsed trapping three men underground. Planes of reporters from across Canada and the United States landed at the airfield both day and night, despite the fact that the airport had no runway lights. Captain Saunders had the idea to line cars along the landing strip and use their headlights to guide the planes safely to the ground.

By the 1940s the world entrenched in war. In 1941, despite years of good service, the Halifax Municipal Airport’s licence was terminated, and the city leased the land to the federal government as an army camp. Barracks were constructed on the airfield, and the business of training soldiers went into high gear. When the fighting was over, the “Bluehill” area would serve yet another unique purpose.

Following World War II, the Canadian Army turned the property over to the City of Halifax. It was decided that it would become a residential subdivision, and that people who had served in World War II would have the first opportunity to purchase the homes in the area. Construction of the first house—unit 302—began in March 1948. Many of the streets in the neighbourhood are named after servicemen from both the army and the air force, including Lieutenant Edward Arab, Gunner Lloyd Fox, and Corporal Ralph William Devlin.

In 1965, the city began work on the creation of a park as a part of the Westmount Subdivision. With the area’s history in mind, it was named Saunders Park, after Captain Donald W. Saunders, and an aluminum memorial made by Fairey Canada Ltd. was unveiled. The statue is located near to where the original airport entrance was once located.

For more information on Halifax’s Municipal Airport, the Westmount Subdivision and Saunders Park, check out these resources: