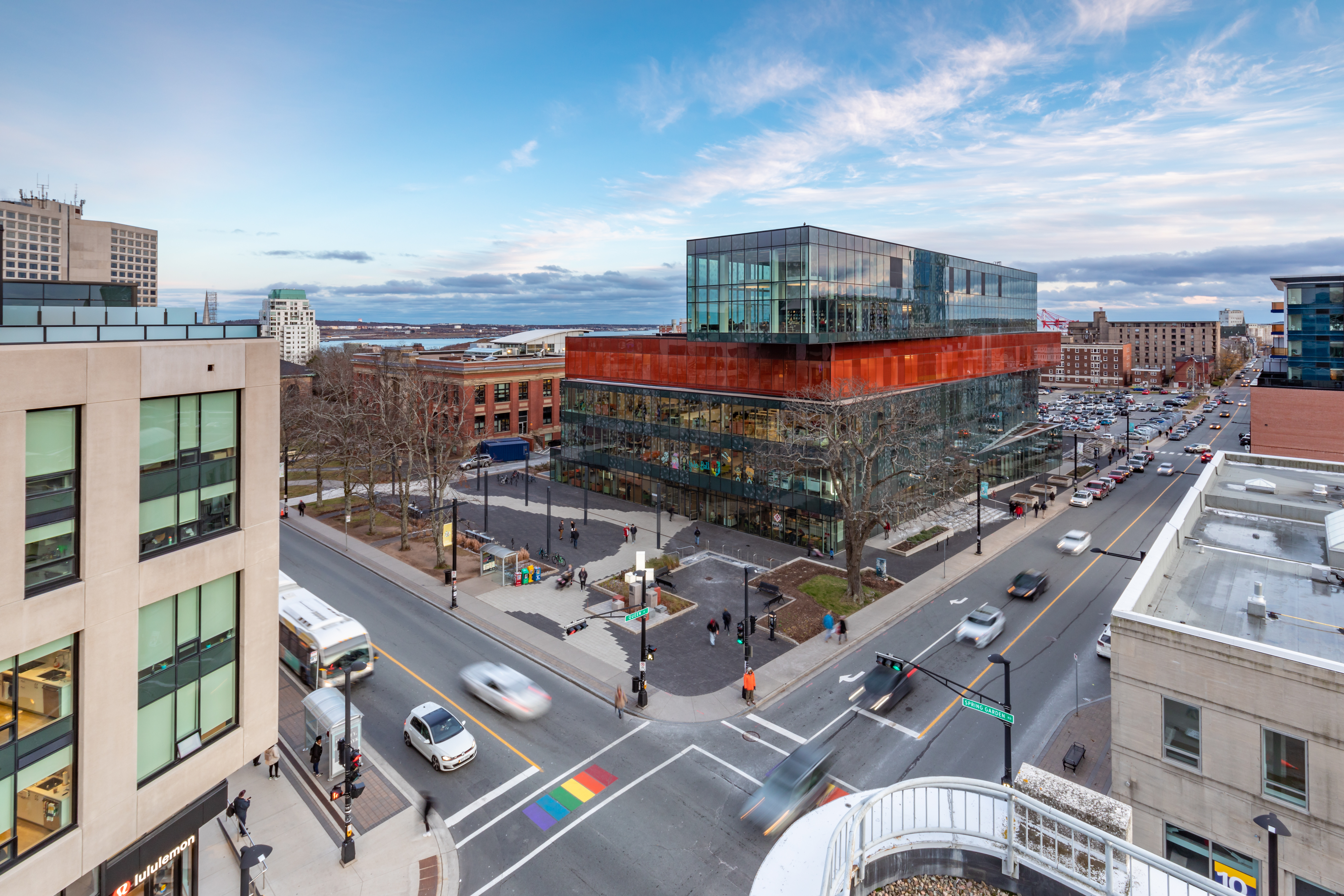 Halifax Public Libraries wishes to acknowledge that we are in Mi’kma’ki. We live, work, and play on ancestral land that belongs to the Mi’kmaw people, the First Peoples of Nova Scotia. Central Library was built on this land. As we seek to build a more inclusive municipality, we remember that we are all Treaty People and that those of us who are non-Indigenous each have an individual responsibility to acknowledge and address the centuries of injustice, suffering and broken promises that resulted from European settlement.

Few people know that Halifax Central Library was built on a virtually unknown chapter of Halifax’s history—Bellevue House. Bellevue House was originally built in 1801 for the Duke of Kent when he was Commandant of the Army in Nova Scotia, and it was the military and social hub of Halifax for 100 years. To me, it was just a parking lot, one I walked across hundreds of times when I lived in Fenwick Towers (ironically named after the engineer who designed and built Bellevue House). That all changed in 2011, when I led the archaeological excavations of the site in preparation for the construction of Central Library.

During our 2011 excavations we moved a lot of dirt, by various means, and the transformation of the site was quite dramatic. Pictured below are the bare bones of Bellevue taken from on top of the backdirt pile. We had to get through two concrete floors to expose the original building footprint, and hundreds of artifacts dating between 1800 and 1850. These artifacts and excavated remains of the foundation were mute testimony to the amazing history that took place within and around Bellevue House.

The middle of the 1800s was a booming time for Bellevue, when it was the cultural heart of Halifax. Large dinners and balls were most likely a weekly occurrence. One of the balls held in 1890 had 600 guests in attendance. I wish I could get into the social aspect of Bellevue a little more and explore its connection with the likes of Adele Hugo, daughter of Victor Hugo, who pursued a naval officer to Halifax and had a fight with on the grounds of Bellevue; or Charles Austen, brother of Jane Austen, an officer in the Royal Navy who stayed at Bellevue while stationed in the city; and Prince Duleep Singh, the son of a maharajah who fled the city in disgrace over gambling debts; and, finally, Emma Albani, Canada’s foremost soprano at the end of the 19th century, who gave a concert at Bellevue House.

Some of the artifacts we found from that time period illustrate the military side of Bellevue, and also give us some idea of what may have adorned their tables, such as this large pearlware platter that would have been used during one of the great dinner parties. These parties would have been raucous affairs and we can only imagine the noise of wine glasses, like the one below, being vigorously banged on the table in acknowledgment of a toast.

But the excavations also showed us that life at Bellevue wasn’t all business and entertaining, as these pearlware children’s cups attest. The most evocative of the cups reads “A Present for My Dear Boy.”

The excavations also uncovered the cobble remains of the stables along Spring Garden Road as well as a large water cistern and a rock drain system.

The final surprise for us was the discovery of the privy/outhouse, which we assumed to have been destroyed. Privies tended to be used as garbage dumps, especially at the end of their useful lives, and they can be little treasure troves. The majority of the artifacts came from the privy, including this pearlware chamber pot.

My job as an archaeologist is to take all of the fragments of pottery, glass, and other artifacts and use that information to reconstruct the lives of the people who had lived there. But past lives are so much more than what we can see and touch. They were made up of sounds and smells that have been long forgotten—the neighing of horses and the smell of manure from the stables; the clattering hooves as the carriages drove into Bellevue House for one of the weekly grand balls; the stamp of soldier’s boots and the metallic clang of their rifles as they came to attention to salute an important personage; and the crackling of burning timbers, clanging of alarm bells, and gasps from onlookers as Bellevue burned to the ground. All of these sounds lay buried under a parking lot for 46 years before archaeology was able to release them.