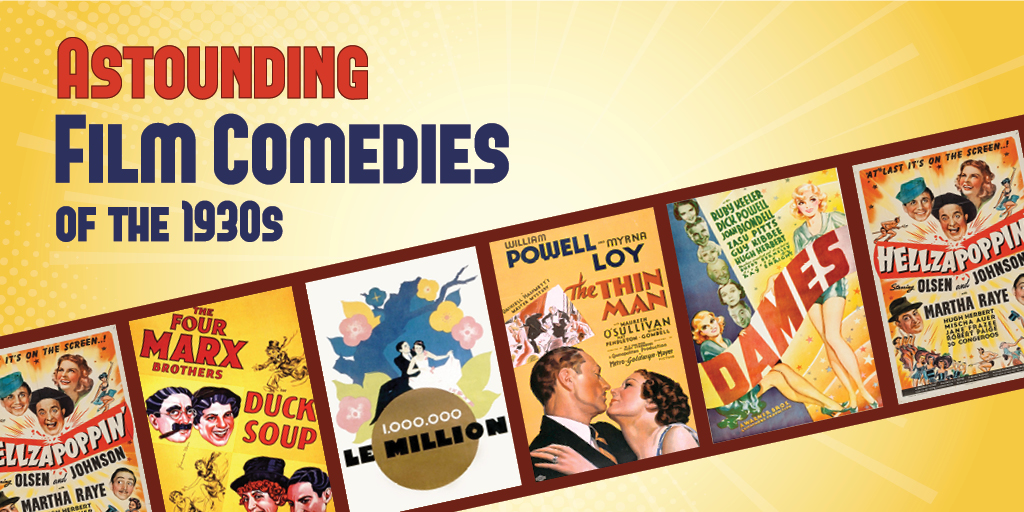 Say goodbye to the winter blues with our Astounding Film Comedies of the 1930s, opens a new window series—5 screenings on Sunday afternoons in January and February. This season will take away the chill, warm your heart and make you laugh.

Last year, I completed the challenge of watching all of the 1,200 movies featured in the various editions of the book 1001 Movies You Must See Before You Die. Before I started, I had watched just more than half (over the decades)—watching nearly 600 films felt like a huge feat! Phew!

1001 Movies You Must See Before You Die

On completing the task (which took a few years), I wanted to mark it with some celebratory screenings, and chose an era of films that consistently blew me away with its fun and inventiveness.

Typical expectations of 1930s comedy are that it is tired, outdated, and old fashioned. Banish any such dismissals! These are silver screen gems rather than golden oldies, chosen for their fun and razzle-dazzle. The pace, liveliness, design, and energy of the selected films are irresistible—while a dose of nostalgia can definitely be found, it can be surprising to find them just as sparkling today.

In January and February 2019, we’ll be screening:

The madcap anarchy of The Marx Brothers’ Duck Soup

Astounding fact: The film was banned by Mussolini.
Duck Soup

The “lyrical, choreographic, giddy”* chase for a lost lottery ticket in Le Million

Check out this article, opens a new window from Criterion that dives deeper into the film.

Astounding fact: Rene Clair is famed for his use of sound, but initial strong resistance to what he called “the monster” of dialogue, "an unnatural creation, just useful for canned theater."

The cocktail-fueled mystery of The Thin Man

Astounding fact: The (very cute) dog named Asta in the film is called Skippy and had a salary of $250 a week, also appearing in Bringing Up Baby and The Awful Truth.

The fourth-wall busting antics of Hellzapoppin’

Astounding fact: Hellzapoppin contains a huge spoiler for Orson Welles’ Citizen Kane released earlier in 1941. With a labelled prop and a disparaging comment, the ending of the classic is completely given away!

With the Great Depression dominating the decade, movie-going often provided an escape. There’s a lot of style and glamour on show. In contrast, films at the time also explored realism. Social issues were tackled with a frankness that became controversial with the rising censorship that that ended the “pre-code”, opens a new window era.

The Motion Picture Production Code created guidelines to ensure distribution and save the morals of the country. Filmmakers' disregard for and maneuvering around these strict guidelines add interest.

A visual gag in Duck Soup makes fun of The Code, which insisted that men and women should not be shown in bed together. In a bedtime scene, we see a man's shoes on the floor near the bed, then a woman's and then finally...some horseshoes! As the camera pans up, it reveals Harpo Marx asleep in bed with a horse, while the girl is in an separate bed, alone as the Code demands.

As the technical equipment and expertise developed, audience numbers were also at a high, boosting production. As sound developed throughout the decade, movies hit a ‘sweet spot’ where filmmakers could flourish and innovate without being held back by the tools of their artform.

Rene Clair's Le Million tells the story of a search for a lost winning lottery ticket. Using sound in different ways is one of the delights, as well as the ambitious use of visual storytelling developed from silent film. The characters express themselves in gesture, movement, and song as much as speech. The rhythms of the action combine, rather than compete. This orchestral approach builds up to a final scene with a joyous celebration chorus.

A charming example of new approaches to sound at the time can be found in the opening of Love Me Tonight, from 1932, directed by Rouben Mamoulian (influenced itself, by Le Million). The sounds of early morning Paris become a symphony of the streets.

Named as an influence on 2017’s Baby Driver by Director Edgar Wright, the innovation of the 1930s continues in the adventurous choreographic use of sound and image.

Watching the comedies of the time is a particularly rich experience in part to changes in society—the contrast between traditional and modern gives a double-edged opportunity for observation of  style, class, and gender in particular. 1934’s Dames (with its song “The Girl With an Ironing Board” being a woman’s love letter to laundry!) is quite startling to say the least. In contrast, strong roles for women can be seen throughout 30s movies, often challenging The Code’s intentions.

Her new bestseller, Seduction: Sex, Lies, and Stardom in Howard Hughes's Hollywood, focuses on exploitative and eccentric director Howard Hughes. She refreshingly ensures that the experience of women is placed at the centre of the biography, particularly important to view a legacy that echoes today in the #MeToo era.

Female directors were few and far between in the era but this international list list highlights the role they played. In 30s Hollywood, Dorothy Arzner is unique—and her Merrily we Go To Hell (1932) is featured in the Pre-Code Hollywwod box set.

Hellzapoppin' has a spectacular Lindy-Hop dance sequence. Legendary African-American dancers Norma Miller and Frankie Manning flip, flop, and fly around while legendary jazz musician Slim Gaillard leads the band. The excellence is diminished by the stereotypical depiction of them as servants, but remains an unmissable and exciting record of Black talent.

An excellent resource for African-American filmmaking is the Pioneers of African American cinema DVD box set available at the Library as well as streaming on Netflix.

I love mischief in movies and there’s no shortage here. In Duck Soup, every social convention is turned upside down. Politics is shown as a fool's playground. The story of a foolish unprincipled dictator recklessly running the country with the slogan "Whatever it is, I'm against it!", may well ring a bell with modern audiences!

Hellzapoppin’ however, really takes the prize in breaking the rules. Glamorous dancers fall into the underworld. The projectionist knocks the equipment so the characters in the film have to fix the screen (our screen!) by pushing it. Notices on the screen repeatedly tell a boy in the audience to go home. A woman keeps shouting for “Oscar!” Characters' clothes change as they move through different backstage sets. A notice at the start of the film provides a useful warning: 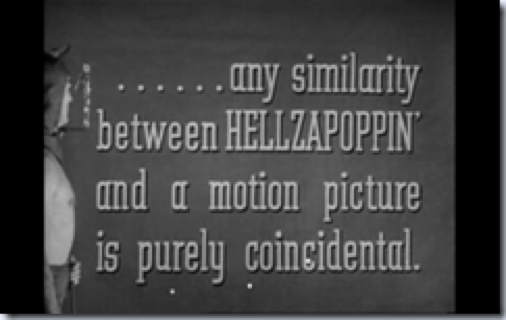 See you at the movies, opens a new window!

Film buff and Library staff member, Matthew McCarthy, has compiled some recommended viewing and reading from, and about this special cinematic era.