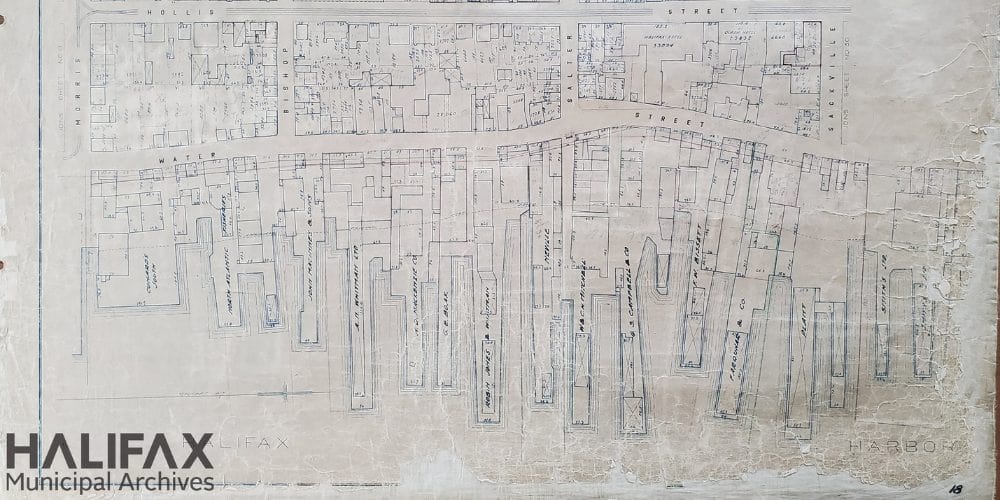 One of the requests we receive most often at the Halifax Municipal Archives, opens a new window is from people researching the history of their homes. Research interests can range from the personal (curiosity about the history of one’s home), the practical (information on drainage in a particular subdivision), or the architectural (original plans for historic buildings). The Municipal Archives has a comprehensive building and property research source guide, opens a new window, but for this post, here are a few tips and key tools for your independent research.

The first thing to remember is that doing property research can be a frustrating puzzle, requiring you to pull together bits and pieces of information from many different sources. In a perfect world, there would be a complete dossier of information on every building in HRM—but that’s just not how municipal governments collect property information. Instead, records are created by a variety of departments, focused on a variety of different elements of built heritage, and have to be compiled.

Archival research takes patience and curiosity. Records can be organized in different ways depending on the type of record, the jurisdiction, and the time period. For instance, property assessment records can be organized by last name, by street name, or by ward or district—with the wards and districts frequently changing over time. Street names, neighbourhoods, and even the names of individuals might be spelled differently in the records, or have changed over time, and there may be gaps in the records themselves. At times you may have to be satisfied with making an educated guess, rather than having a definitive answer.

Researching your own home—how we can (and can’t) help

We can (probably) help you find the former address

The civic address your home has today might have been different at various points in the past. Some of these changes were widespread and well-documented, such as the change to all street numbers in the City of Halifax in the early-to-mid-1960s. The Municipal Archives has a guide, including a civic address cross-reference tool, here, opens a new window. For other municipalities, as well as other time periods, these types of changes aren’t so well-documented. It can take a bit more work, but City Directories can help you track civic addresses over time. Halifax Public Libraries also has a collection of city directories, and Nova Scotia Archives has some digitized (up to 1926) online, here, opens a new window.

We might be able to help with clues to building details

Property assessment rolls for the City of Halifax, Halifax County, and Dartmouth give a variety of different information depending on the year and the time period. Aside from telling you the assessed value of the property, they can also be useful tools in determining property ownership and addresses. Occasionally those same property assessment rolls give some sense of the buildings on a given property, but they tend to be pretty vague (think “barn”). You can sometimes find a bit more detailed information for City of Halifax properties in the property assessment field cards and building permit application records.

Field cards were a tool used by assessors to record features of a property in order to determine its assessed value. Assessors noted details about each property and included information on plumbing, roof type, heating, occupancy, number of rooms, and the commercial or residential nature of the property. Field cards from the 1950s-1960s will sometimes include a black and white photograph(s) of the property appended to the card—you can see the black corners on this card where a photo would have been slotted in. Field cards were typically updated yearly and can be used to track property changes.

Building permit applications were submitted to the City of Halifax Building Inspector's Office and were required for new construction, as well as repairs, alterations, and demolitions. Applications can give the location of the construction, name of the owner, date of application, name of architect, builder, estimated cost, type of building, and construction details, though the information required varied over time.

We probably do not have architectural plans for your house

Most architectural drawings submitted for building inspection were not kept. However, recently we acquired microfilm copies of City of Halifax building, opens a new window inspection, opens a new window plans, opens a new window, approximately 15,000 sets of architectural plans from the 1940s-1990s. These plans are not as-built and may not accurately represent the finished structure, as changes may have been required during construction. While these plans do have an index, you probably won’t be surprised at this point to hear that it is a bit difficult to use—but we’re here to help!

Two earlier map series that can be useful are the 1862 Gossip surveys of Halifax, opens a new window and the 1878 Hopkins City Atlas, which Nova Scotia Archives has online here, opens a new window. The 1862 survey laid out street lines, show the extent of land grants, "altitude" of streets above the harbour, and longitudinal bearings of all streets, public buildings, sewers, and wharves. It also shows the frontage (not the full footprint) for buildings, colour-coded to building material type: [KEY - YELLOW: BRICK; PINK: WOOD; BLUE: STONE]. The 1878 atlas shows landmarks and public spaces, institutions, brooks and water sources, footprints of buildings, civic addresses, and includes some ownership and occupancy details.

Another valuable resource is fire insurance plans, which show the size and shape of buildings, give civic addresses, and identify construction materials and built features. While we only have one lonely Dartmouth fire insurance plan from the 1960s at the Municipal Archives, Nova Scotia Archives has a wider selection here, opens a new window.

There’s a chance we might have a photograph of your house, though it’s often a slim one. It can be frustrating to find well-shot images of other people’s homes, but the fact is that municipal staff weren’t driving around documenting every single house in Bedford, Dartmouth, Halifax County, and the City of Halifax. (Imagine if that’s what City staff were out doing today!) Instead, houses often show up by chance when other things are being documented—like the stairs below.

It’s useful to keep in mind who would have been going to the effort of taking and filing photographs at various time periods, and for what purposes—what were individuals trying to document? What were city staff trying to document? While today it’s so easy to take a photograph of pretty much anything at any time for any reason, that has only been the case for a very recent time period.

Many of the photographs taken by former staff of the Works Departments document buildings designated as “unsightly” or ready for demolition to make way for new developments.

Photographs might also have been taken as part of specific projects, such as Dartmouth’s Neighbourhood Improvement Program, opens a new window (NIP) in the 1970s. An initiative of the Canadian Mortgage and Housing Corporation, NIP aimed to rehabilitate low-income neighbourhoods nationwide. The program funded improvements to physical amenities, such as parks, recreation facilities, sidewalks, and roads. Six areas of Dartmouth were chosen to take part in NIP: Harbourview, Notting Park, South Woodside, Tuft’s Cove, North Woodside, and Austenville.

The Heritage Advisory Committees for Halifax, Dartmouth, Bedford, and the County of Halifax can also provide information on homes that have been designated as heritage properties, or which were being considered for designation. These records can sometimes include descriptions and histories for properties, as well as information on the heritage designation process. Certain areas of HRM may have been considered as historical neighbourhoods as well.

As you can see, each of these resources might give you clues of how your home used to look, when changes were made, what materials were used, who used to live there, and so on. Sometimes these clues might be just what you’re looking for, and other times they might leave you with more questions. We understand that can be frustrating, but it can also be rewarding to put together the puzzle pieces you do have and build an outline of your home’s history.