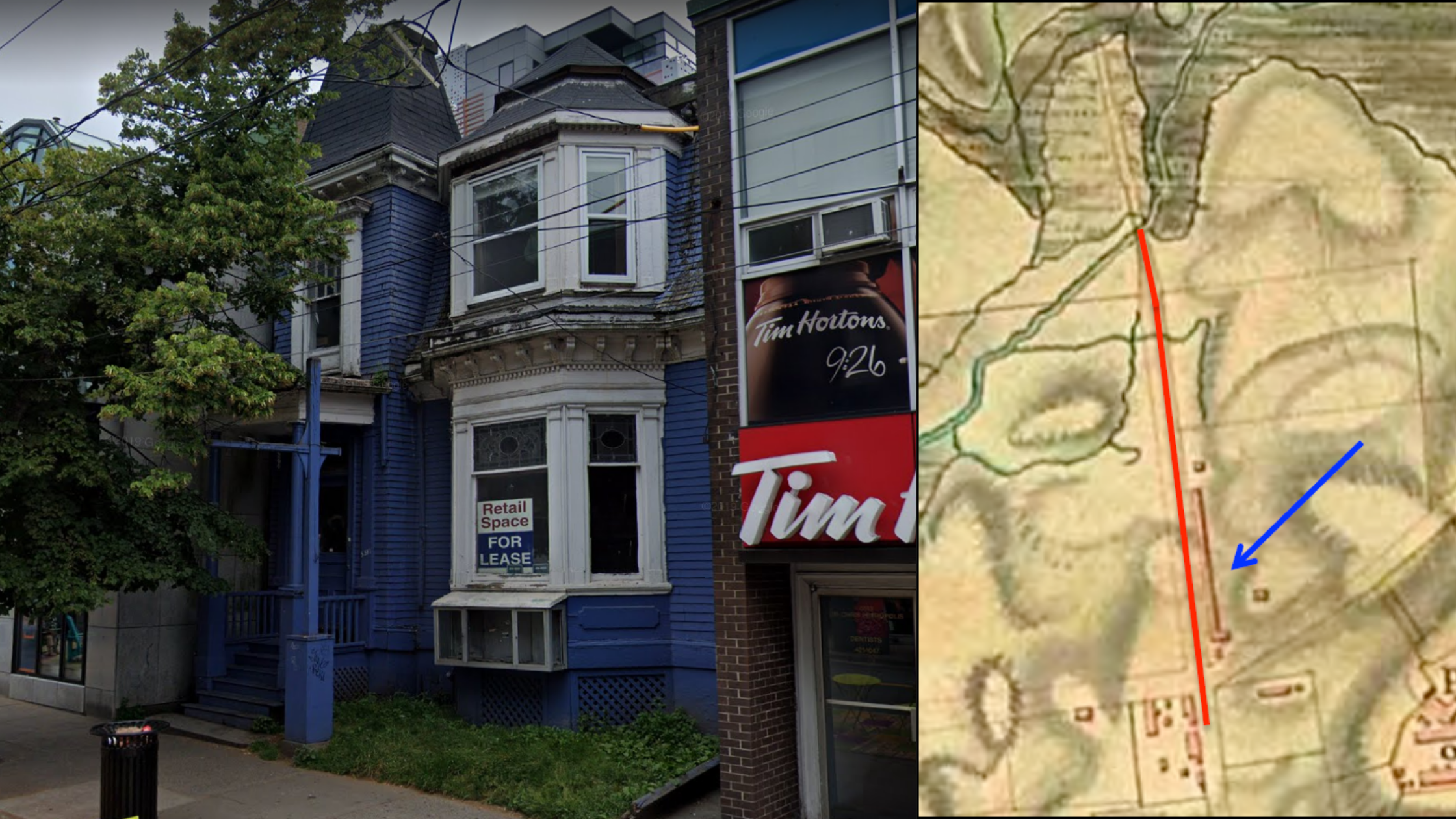 On the block between Birmingham Street and Dresden Road there is a building that appears out of place. Situated between FYI Doctors and Tim Hortons, its back garden surrounded by the shops of the Vertu Mall, 5517 Spring Garden Road stands out amongst its neighbours. As the downtown core grows with new high-rises and modern architecture, it is a building that captures the imagination with its stained glass windows, decorative trim, and whimsical purple paint. While respecting the privacy of the current owner, let’s explore a brief history of this property.

The land on which Halifax is built is Mi'kmaq territory. Before the city was even a thought, the Mi'kmaq would have used this area as a shelter against the elements, as a source of fresh water, and as a bountiful hunting ground. The downtown area of Halifax up to Point Pleasant Park, known as Amntu’kati, or “Spirit Place”, is of cultural significance as it plays an integral part in the Mi’kmaq creation story. It is important to always remember who was here first as we talk about who came next.

In 1749, when the founding of Halifax took place, the area we know as Spring Garden Road was outside of the fortifications and not considered a part of Halifax proper. Richard Wenman, a settler who arrived on the ship Charlton, was one of the first to be granted property on the north side of Spring Garden Road. Here he built a ropewalk, or rope factory, as well as a brew house. The ropewalk property is said to have stretched from Queen Street to just the other side of Dresden Row.

When Wenman died, the business was passed on to his step son George Pyke. Pyke, who would go on to be head of the Halifax Police Department, also constructed a home on this land, which was one of the only homes in the area until the late 1810s. The ropewalk building can be seen on this map from 1784; it is the long, narrow building indicated by the blue arrow. The red line indicates an approximation of Spring Garden Road from Queen Street to South Park Street.

By the 1830s, the ropewalk was no longer on the Pyke property, and it was around this time that the land was subdivided into smaller building lots. As homes and businesses were built in the neighbourhood, the area that would become home to 5517 Spring Garden Road remained largely empty. This can be seen on the Hopkins’ City Atlas from 1878: the property between Birmingham Street and Dresden Row appears to only have one building facing Spring Garden Road. At this time, the land was owned by Michael Kearney who operated a dry goods store on the corner of Birmingham Street, and T. J. Wallace, a lawyer whose home faced onto Dresden Row.

Sometime around 1884, the land was purchased by William Sarre (1846-?). The Sarre family operated a hair salon in Halifax for many years, but gradually the family trade changed to tobacco and fishing tackle. This allowed them to list themselves numerous times in the McAlpine Halifax City Directory, not only under “tobacconists” and “fishing tackle and fly dealers”, but also “fancy goods” and “base-ball supplies”. Their shop had a number of locations downtown, but the homestead remained on Spring Garden Road.

It was during the time of Sarre’s ownership that the house was likely to have been built. It appears to be in the style of a Halifax Box house, which was a popular design in the late 1800s. Named after its box-like shape, this type of home is characterized by a flat, (or nearly flat), roof, pairs of front facing windows on the upper and lower floors (sometimes in a bay window style), and limited decorations like scallop-shaped shingles and gingerbread trim. In their book Heritage Houses of Nova Scotia, Stephen Archibald and Sheila Stevenson describe the Halifax Box house as “…a good solution to the need for a versatile house on a compact urban lot.” (page 78).

In 1914, Kenneth A. McKenzie (MacKenzie) (1880-1958) purchased the house. Permit records of the time state that McKenzie made changes to the bay windows of the house, and also made adjustments to the front door. McKenzie was a physician who was on active duty in World War 1 from 1916-1918. During this time, we see a different name at 39 Spring Garden Road: Edgar Kaulbach (1862-1944). The principal of the Maritime Business College located at 71 College Street, Kaulbach was also a certified accountant. When the war ended, McKenzie once again took residence at 39 Spring Garden Road, leading one to believe that the house had been rented to Kaulbach rather than sold. McKenzie remained at this address for another five years.

Between 1924 and 1930 two other people are listed as living in the house: D. M. Griffin and Glynford C. Hatfield. Daniel M. Griffin (1874-1932) was the manager of Dominion Life Assurance Co in the Tramway Building at 50 Sackville Street. Glynford Clarke Hatfield (1884-1963) was manager of Metropolitan Life in Halifax, and also a served as a member of the Halifax School Commission. It is likely, however, that during this time McKenzie continued to own the house, as in 1930 a permit for general repairs to the property was issued in his name.

In 1931, Mrs. Agnes M. Crook (1880-1967) purchased the house. She was a widower, her husband William H. Crook having died three years previous. Crook lived in the home with her sister Harriet Giles (about 1881-1971), who worked as a milliner, or hat maker. She operated her hat business from inside the home. It’s also possible that rooms were let to rent in the house. The registered voters list from 1945 shows eight additional people registered as living on the property, including Crook and Giles’ brother Allan Giles. In 1955, Harriet Giles took over as the official owner of the property. 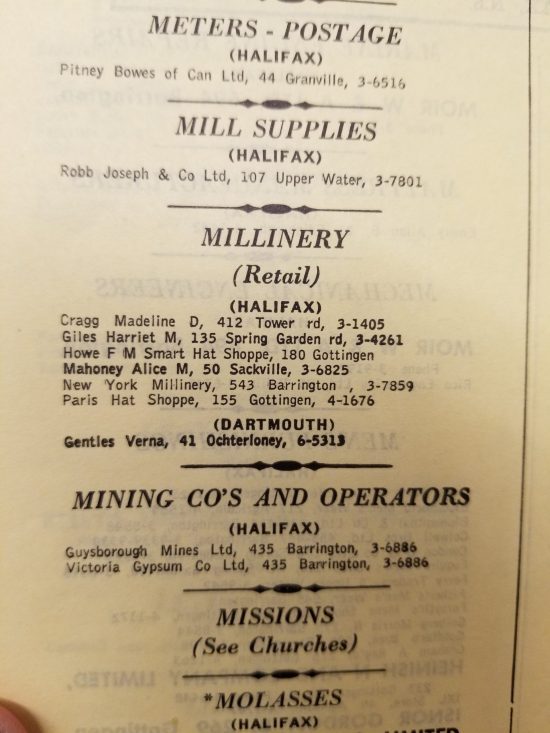 In 1966, Maude (Maud) Tanner owned the property. At this time, the house functioned as the Halifax-South Postal Station. Post Masters at this time include C. J. Noseworthy, L. F. Burgwin, and R. Patton. By the start of the 1970s, the house was home to the Canadian Craft Boutique. The rest, as they say, is recent history.

Halifax is a modern city, but its architecture highlights a past that is much more than steel and glass. Nestled in the middle of an ever developing streetscape, the house at 5517 Spring Garden Road is a piece of our collective story; a reminder that simple homes where regular people lived regular lives are beautiful and of intrinsic value to our community.

If you would like to learn more about Halifax streetscapes, architecture, and past residents, check out these sources:

History of Halifax, a Mi’kmaw perspective by Michael McDonald