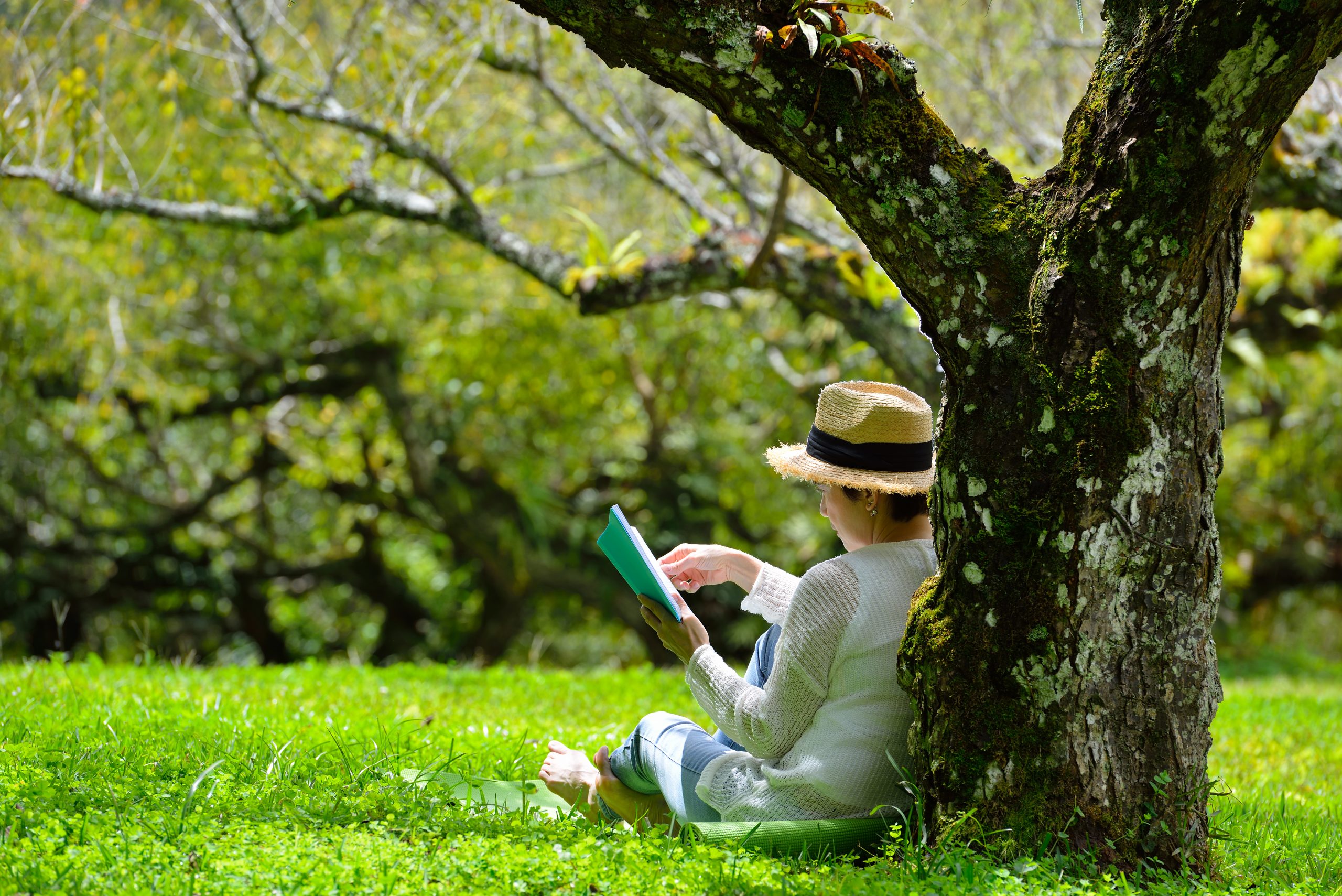 Summer is my favourite season to experience in Nova Scotia. Even as we adjust to life in a pandemic, we can still visit the province's beautiful parks and feel safe with plenty of room to social distance. I believe combining the great outdoors with a favourite book is a recipe for a summer well-spent.

Read on to see some of my favourite spots in the HRM and my suggestions for YA books to read while you’re there. These recommendations are based on each book's setting and atmosphere, as reading in an environment that relates to the story can make for an even more immersive experience. These books are great reads for adults, too! And if you like to spend your time outdoors exercising, try listening to an audiobook and read with your ears while you move.

You’ll notice that this list focuses largely on the Halifax Peninsula and nearby areas, as that’s where I live and venture. I look forward to hearing your recommendations so I can expand my summer adventures and reads—please share in the comments below! 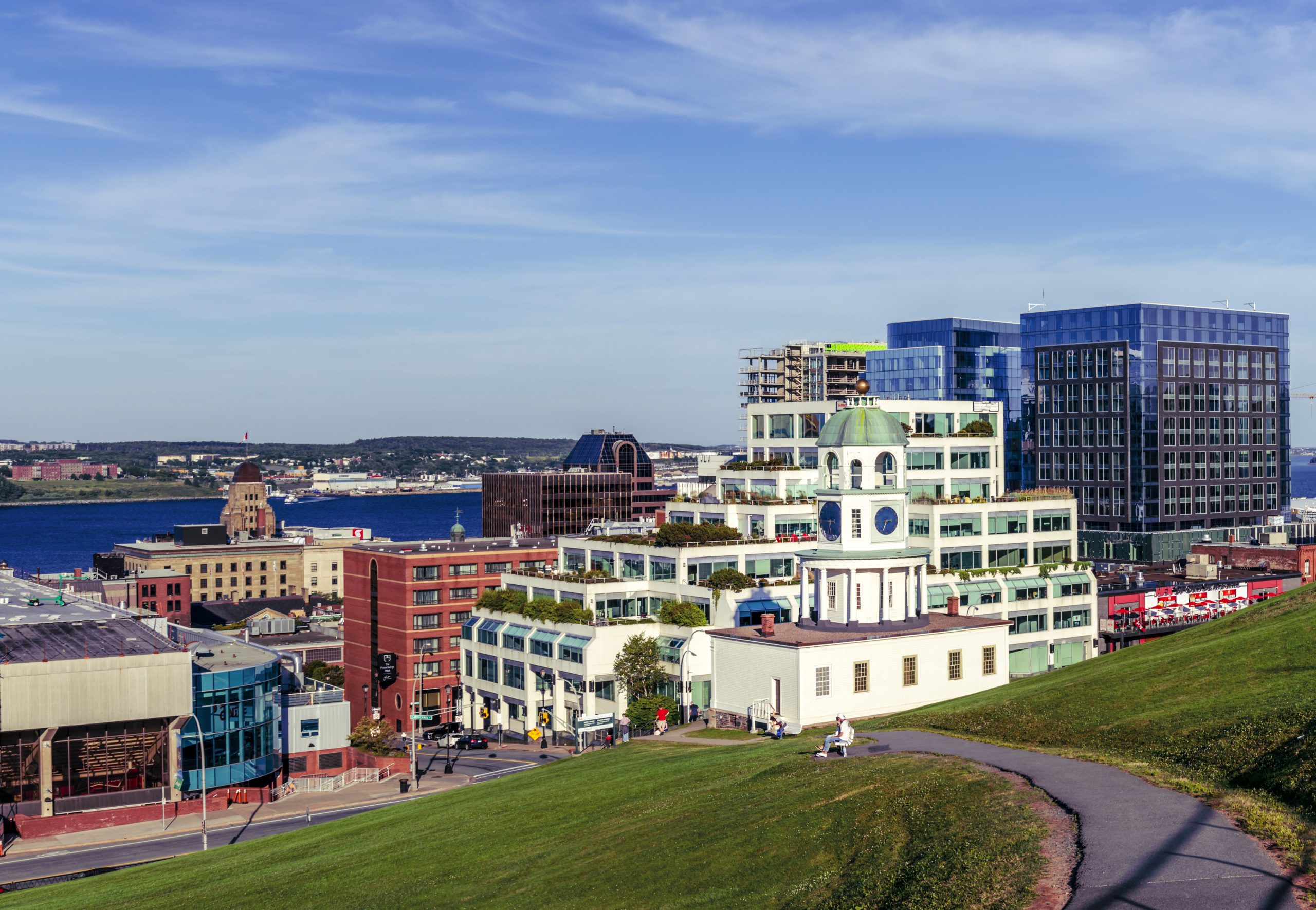 The view from this notable hill in downtown Halifax is splendid in any season, but especially so in the warmer months. Find a spot to rest on the hill, kick back, and watch the sunset over the horizon. With such a charming view of the greenery, the harbour, the Halifax Town Clock, and the many new and old buildings surrounding the hill, the perfect book to read here is the whimsical Howl’s Moving Castle, opens a new window by Diana Wynne Jones.

If you’ve seen the Hayao Miyazaki film, opens a new window, you will surely see the similarities in Citadel Hill’s rolling green hills and picturesque view of the city. Jones’s book is a perfect companion for fans of the movie and explores these characters further in delightful and hilarious ways. Our protagonist, Sophie, is stuck in a dreary life as the eldest and most responsible daughter in her family. Her life takes a shocking turn for the worst when she is transformed into an old woman by an angry witch. Seeking a cure, Sophie poses as a cleaning lady and moves in with the vain and notorious wizard Howl to manage his traveling castle. Hilarity, adventure, and magical antics ensue for this bickering duo with clashing personalities. 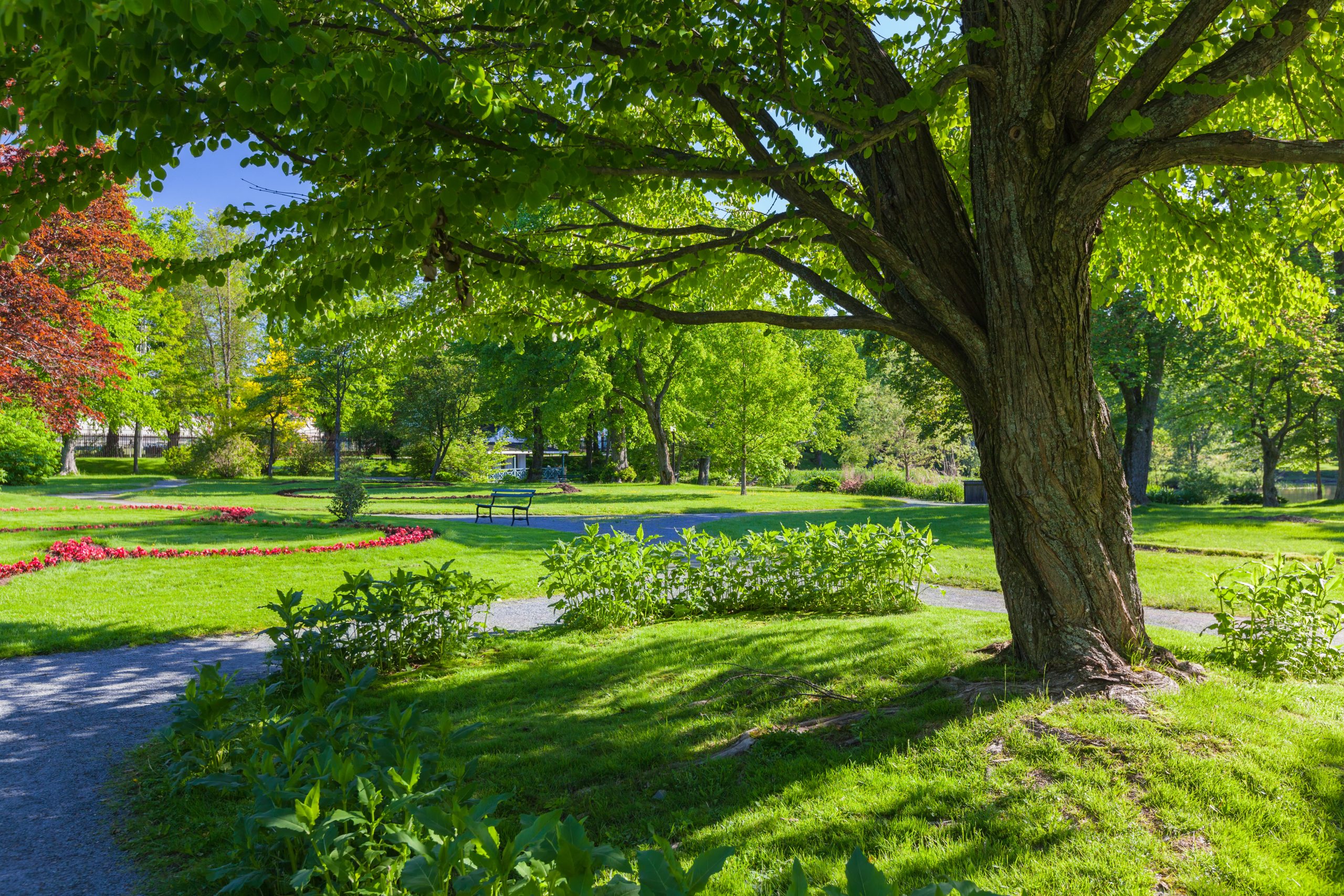 These public gardens were established in the Victorian era and span a block-wide in downtown Halifax, near Spring Garden Road. Full of beautifully placed flowers and lush greenery, the park has many paths that wind you through the manicured gardens and around the quaint pond. There are numerous benches placed along the water or under the shade of trees, as well as open grass space in the Family Lawn Area. Enjoy this spot in the summer as the Gardens are only open from May to November.

If you’re spending an afternoon here reading, Jane Austen’s Emma, opens a new window is the book to immerse yourself in (that’s what I did!). This classic Regency novel is full of comedic misunderstandings, a stubborn heroine fond of match making, witty dialogue, and a surprising romance. Set against a scenic countryside backdrop, reading this in the Public Gardens will surely be an atmospheric treat. You may even catch the occasional outdoor concert in the gazebo. And if a duck happens to cross your path, remember not to feed or pet it.

This forested park is an excellent spot for any outdoorsy person. Whether you’re listening to an audiobook while hiking through the forest, or placing a picnic blanket to read in the open grassy fields by the ocean, you will have a relaxing time surrounded by nature. There are even summer performances here by theatre company Shakespeare by the Sea!

A great pick to read at Point Pleasant Park is The Raven Boys, opens a new window by Maggie Stiefvater. The first book in a quartet, this contemporary fantasy revolves around Blue, an ordinary girl in a family of psychics, Gansey, the boy she is foretold to kill, and his unique group of friends who all have their own stories to tell. Set in a small Virginia town full of supernatural occurrences, the teens discover a magical forest and begin a quest to find a sleeping king who can grant any wish. Perfect for readers who enjoy a good fantasy mystery with a lovable group of characters and an ill-fated romance. And if you enjoy the first book as much as I did, the rest of the series will be sure to please. 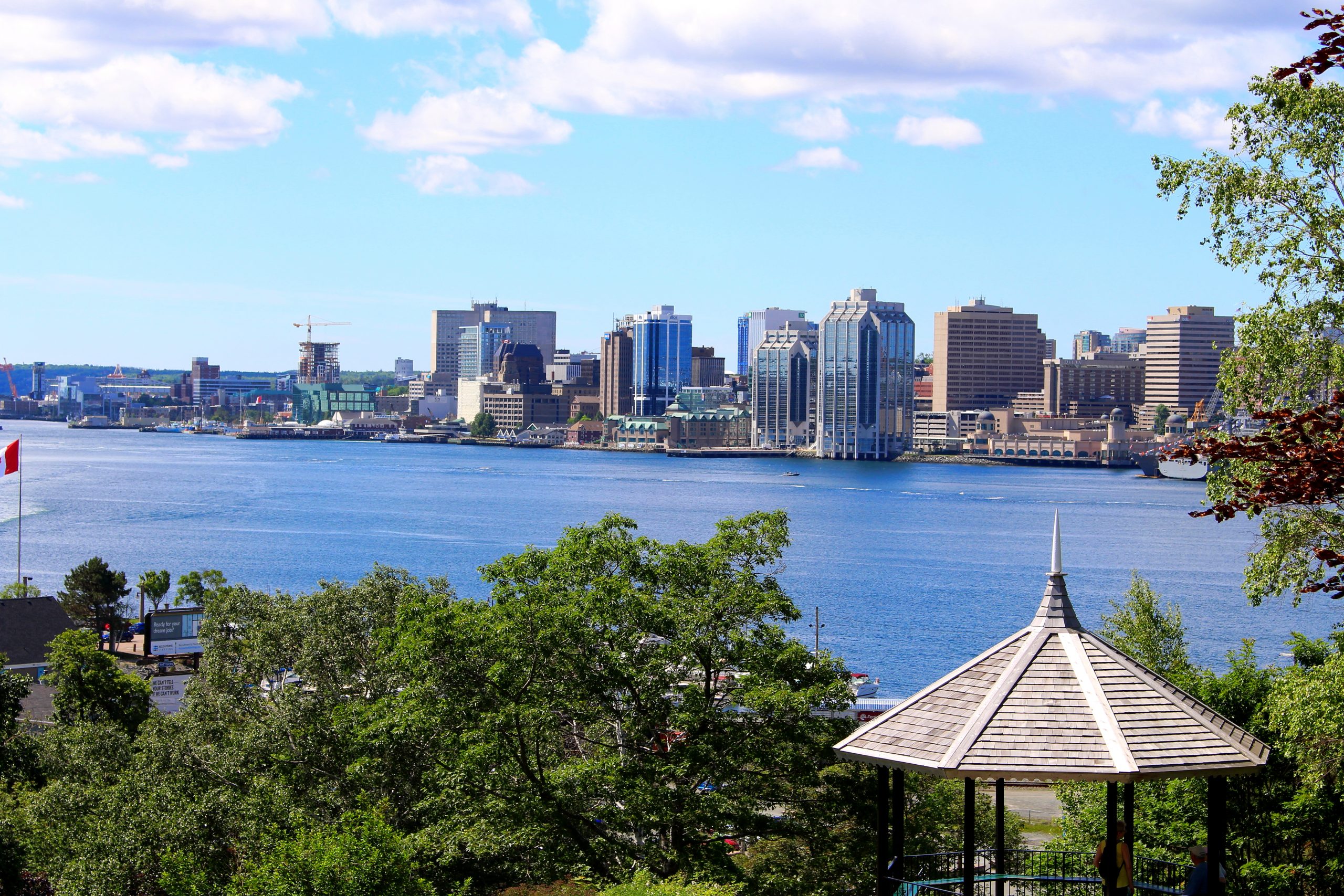 The Dartmouth Commons are 300 acres of green space laced with winding walking paths, blooming flowers, many park benches, and a gazebo with a beautiful view of the harbour.

For this park, I recommend the enchanting Girl, Serpent, Thorn, opens a new window by Melissa Bashardoust. In this thrilling, original fairy tale, Soraya is a princess cursed to kill anyone she touches and thus lives a very lonely life. When she attempts to find a cure to her curse, Soraya becomes a morally grey character toying with the line between human and monster. Will she learn to accept herself or become the villain people see her as? Featuring a bisexual protagonist and fused with Persian culture, extraordinary worldbuilding, and exciting twists, this atmospheric fairy tale is the perfect book to read in a leisurely park. 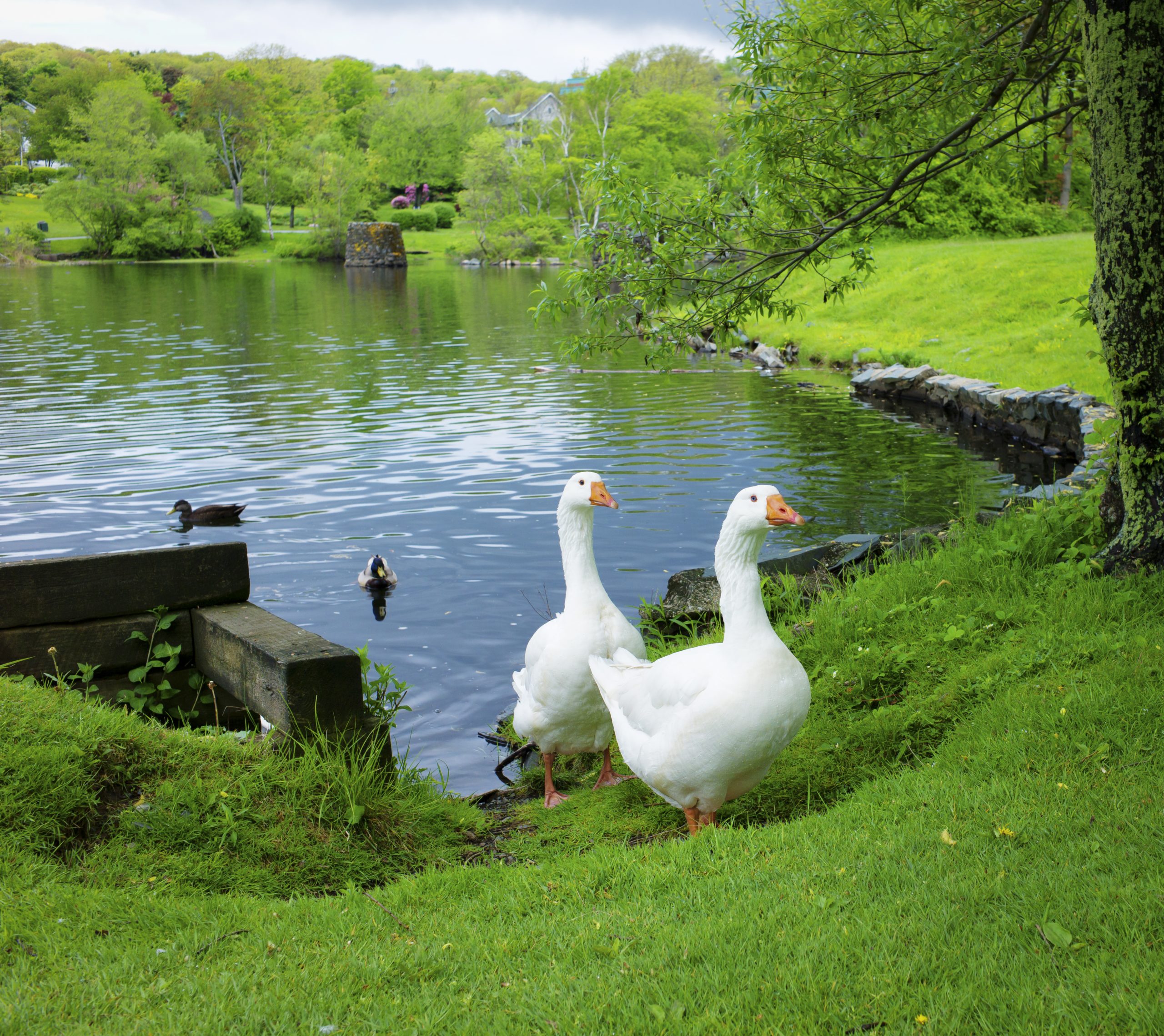 Sullivan’s Pond, located in Dartmouth, is a must-see stop on your summer reading tour. It has a stunning fountain in the middle of the water, beautiful green banks surrounding it, and a concert pavilion perfect for summer events. Grab a bench or a spot on the grass and see if you can catch a glimpse of any wandering ducks or geese.

What would be better to read in this small park tucked away in the city than a Victorian-era London mystery? A Spy in the House, opens a new window, the first in The Agency series by Y.S. Lee, tells the tale of Mary Quinn, a young orphan taken in by an all-female detective agency masquerading as an orphanage. At seventeen, Mary receives her first major assignment to infiltrate a merchant’s home by becoming a lady’s companion to his daughter. As she uncovers the mystery of disappearing cargo ships, she encounters danger, a budding romance full of hilarious banter, and harrowing escapes—all while trying to understand her Chinese heritage in a gritty Victorian London.

If you’re a fan of clever female spies in a historical setting, you will enjoy this series. I spent my teen years growing up with Mary and now it is my comfort series whenever I am in a reading rut.

The Agency, opens a new window 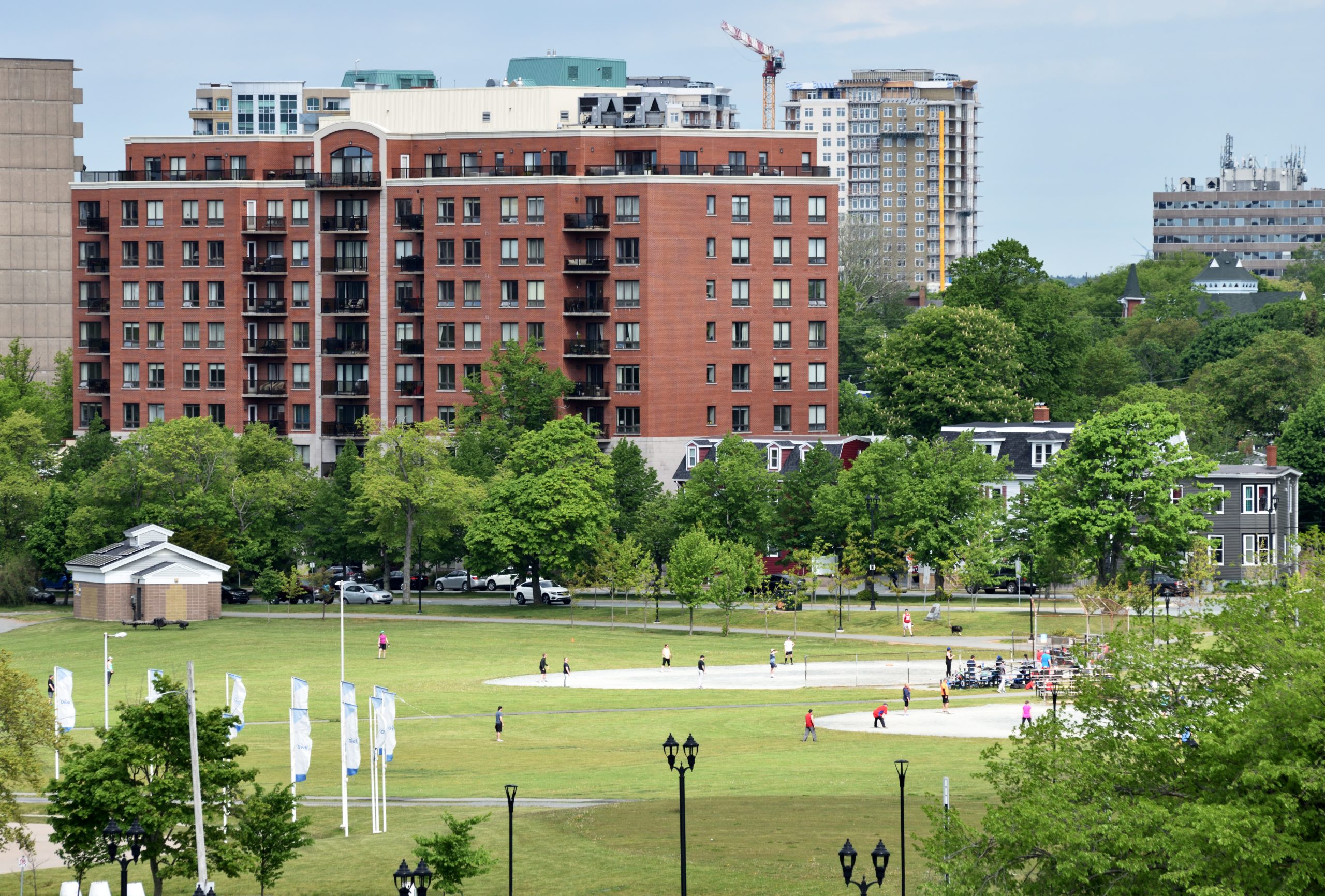 The Commons, as it is often to referred to as, is Canada’s oldest urban park and has many great features such as a grand skating oval, skateboarding park, and acres of open space for various activities. Picking a spot in the Commons to relax with a book will be a breeze.

In this vast park bordered by Halifax’s busy streets and buildings, take a trip into a dystopian paranormal fantasy with the The Immortal Rules, opens a new window by Julie Kagawa. Allison Sekemoto is a human trying to survive in the Fringe while living at the mercy of vampires. One day, a fatal accident leads to her being turned into the very creature she hates most. Now a freshly turned vampire, she heads out of the Fringe to find the cure for the disease spreading in their post-apocalyptic world. Allie is a strong protagonist traveling the world with her sword and motorcycle while utilizing her new supernatural abilities. But she is also still human at heart, and she must make difficult choices when she meets other humans trying to survive out in the wild.

This unique, fast-paced, dystopian vampire story is an entertaining blend of multiple genres and guaranteed to keep the pages turning. If you think you're over vampires, you will be just as surprised as I was when I read this book. 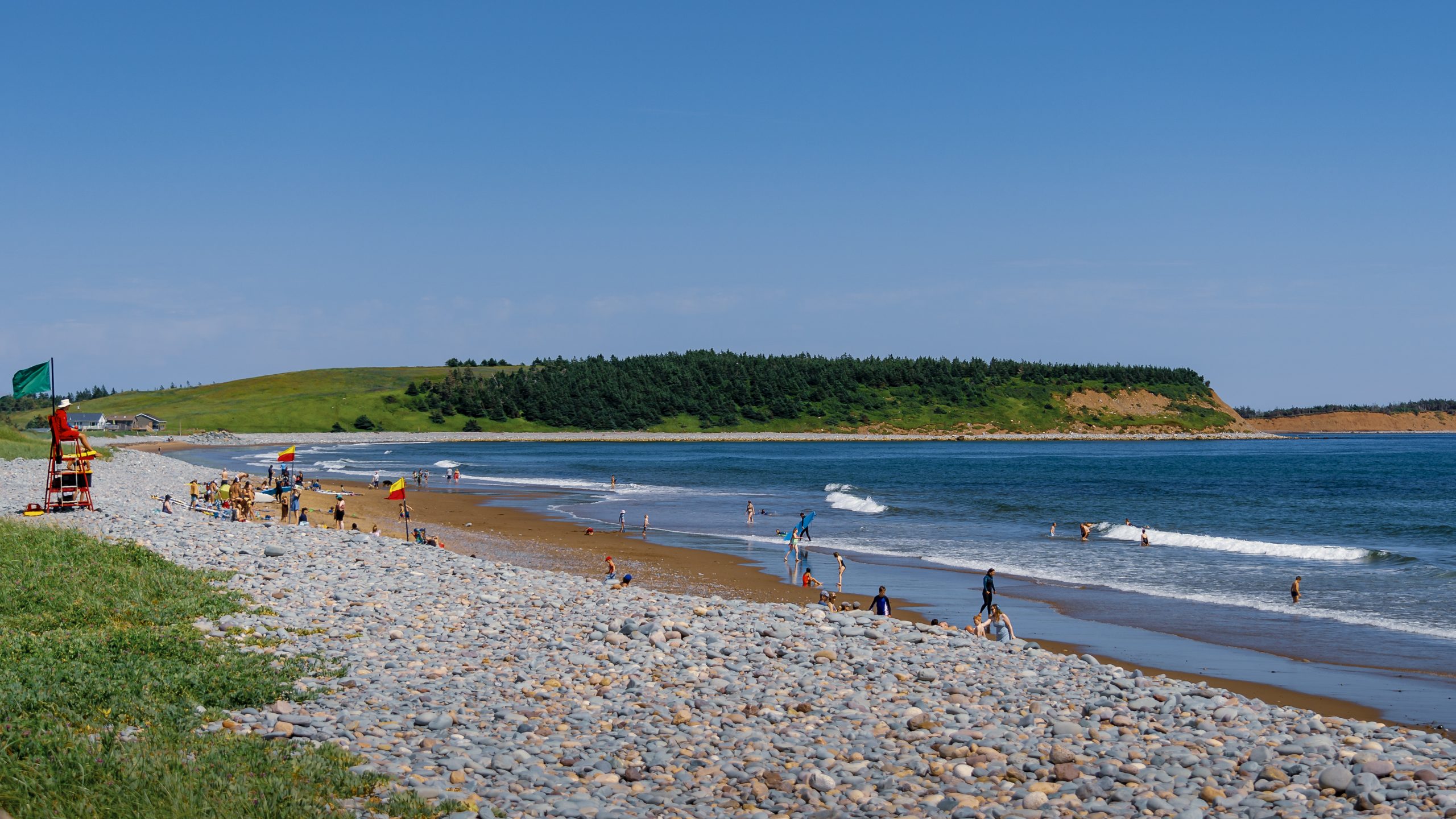 Just east of Dartmouth is the beautiful Lawrencetown Beach, known for its surfing, boardwalks, and walking trails. If you prefer to relax and read on the beach, find a comfortable spot and sink into the sands of this fantasy story that is far from a from a light beach read, but will have you hooked in no time.

An Ember in the Ashes, opens a new window by Sabaa Tahir is the first in an epic series set in a desert empire inspired by Ancient Rome, with the addition of magic and an academy that trains elite, ruthless soldiers called Masks. The story is told from the dual perspectives of Scholar spy, Laia, sent into Blackcliff Military Academy undercover, and Elias, Blackcliff’s star pupil who secretly wishes to desert the vicious school that raised him. As these two rebels inevitably meet, their interests align and the fight for freedom becomes much larger than they ever expected. As you speed through the tale of this dark and unkind world, you will find romance, action, and devastating twists and turns.

Like the author, I am South Asian, and I loved seeing the diverse representation in the characters and recognizing pieces of my culture throughout the series.

An Ember in the Ashes, opens a new window 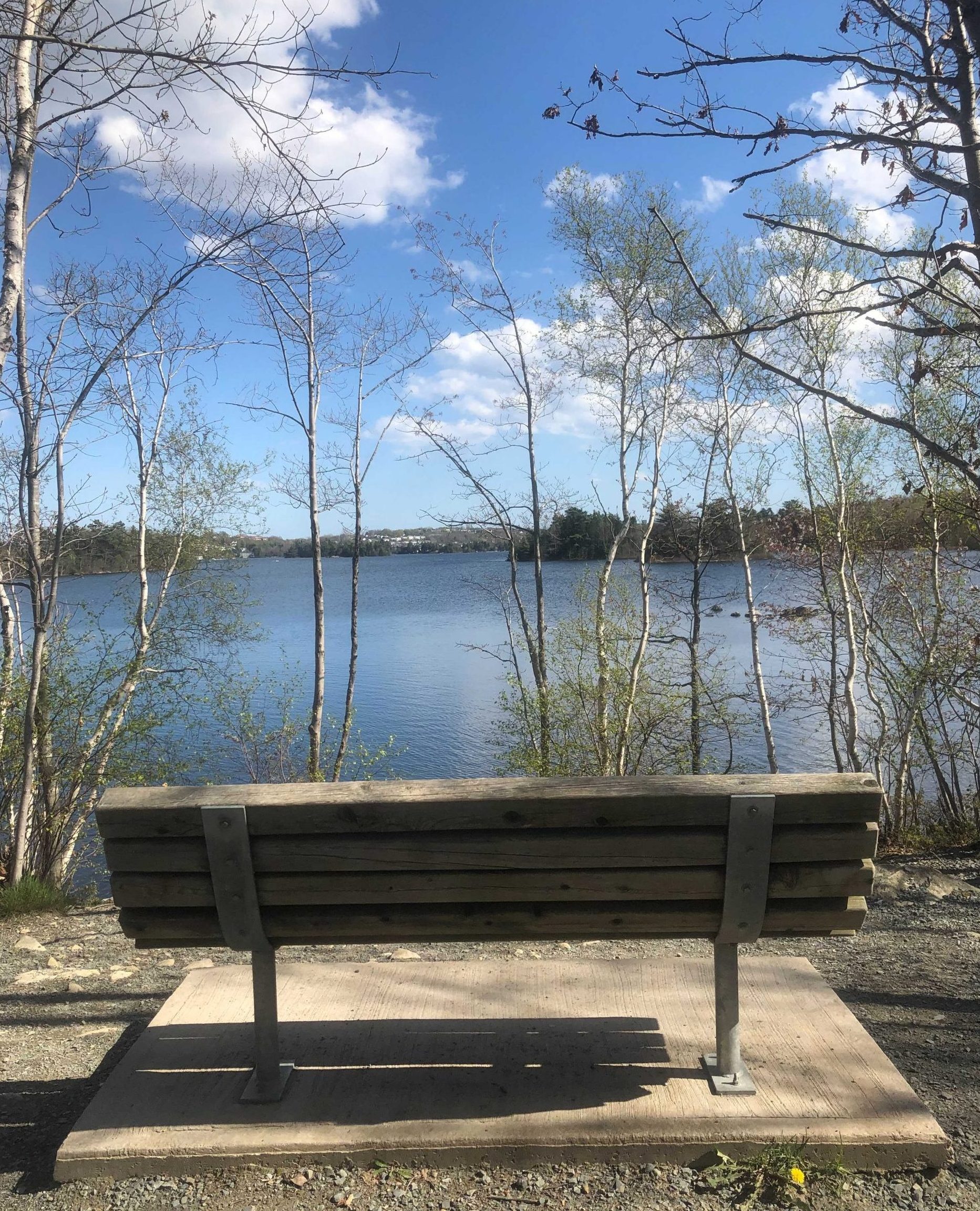 This urban park located next to the Dartmouth Crossing shopping district has a dense forest that makes you forget you are in the middle of the city. Its walking trails are popular, but there are many quiet spots to rest on a bench and take in the beautiful view of the neighbouring lake. For this park, I recommend bringing along an exciting new adaptation of Romeo and Juliet with a similar waterside setting.

These Violent Delights, opens a new window by Chloe Gong is set in 1926 Shanghai where two rival gangs are at war while a river monster terrorizes their city. Roma and Juliette, previously lovers and now rivals, have to put their differences aside to help the citizens before more death overtakes their city. This book has high stakes, enemies to lovers, political intrigue, and a blend of different cultures in a vivid historical setting. And the best part is, this is only the beginning! After the ending in this book, you will be eagerly anticipating the sequel coming later this year. 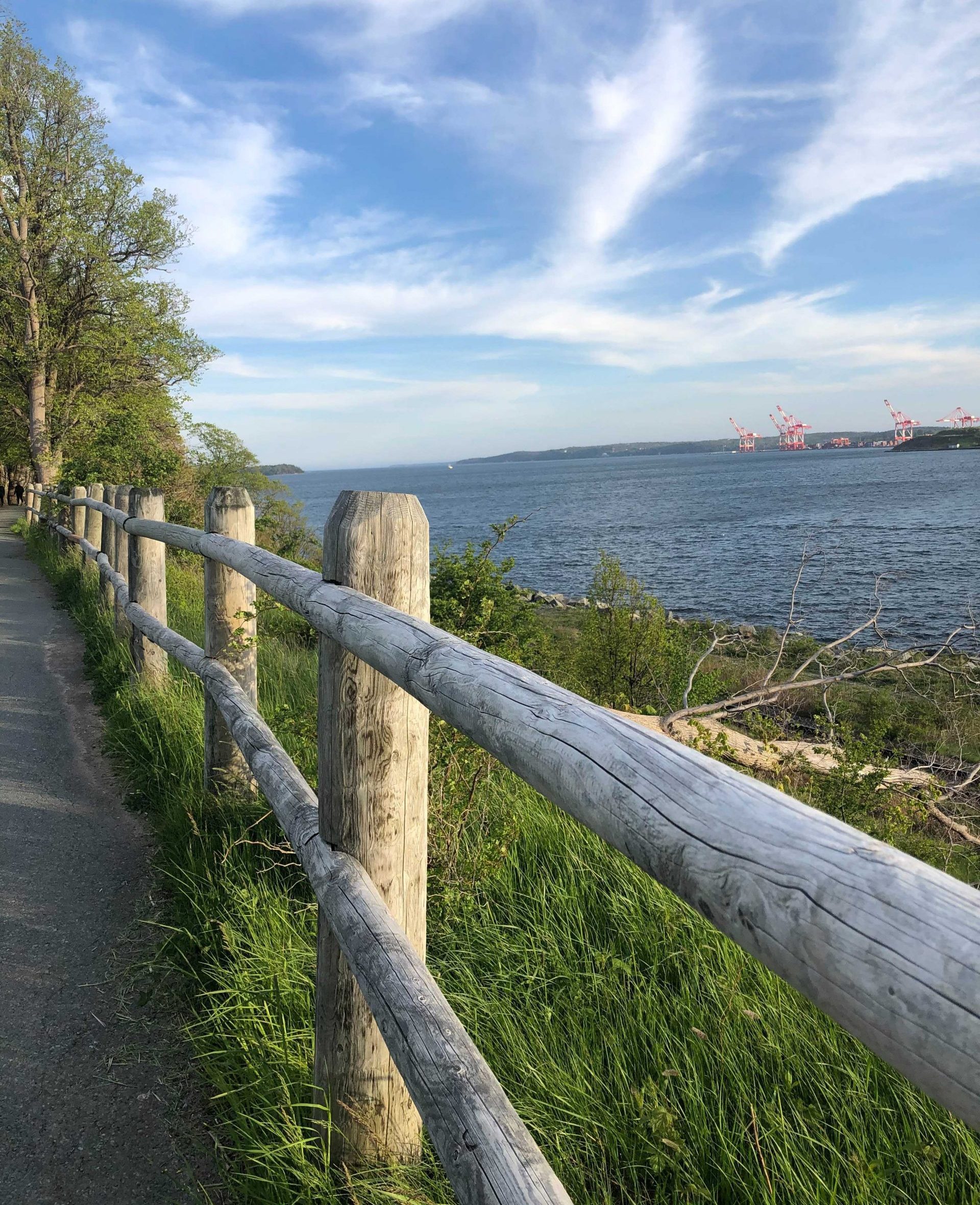 This 6 km trail runs along the Dartmouth waterfront from the Alderney Gate Ferry Terminal to the Woodside Ferry Terminal. If you’re starting at the Alderney Gate Ferry Terminal Park, you can grab a bench or sit by a tree, or walk further down the trail and find a spot you like. Wherever you stop, you will have an unbeatable view of the harbour and the Halifax waterfront. Take your imagination further and view this urban waterfront as a portal to a different world. If you’ve noticed a running theme of historical and fantasy books in these recommendations, have no fear—sci-fi is here!

The Darkness Outside Us, opens a new window by Eliot Schrefer is a mysterious, romantic, and harrowing survival story of two boys, Ambrose and Kodiak, stuck onboard a spaceship alone. They are sent from different countries on a mission to rescue Ambrose’s sister, but the plot quickly thickens as they discover more about the ship and the dangers they face. To survive, these two enemies must learn to trust each other. This book was just released in early June, but with such raving reviews on Goodreads of readers gripped in suspense, I immediately jumped in the hold queue!

The Darkness Outside Us, opens a new window