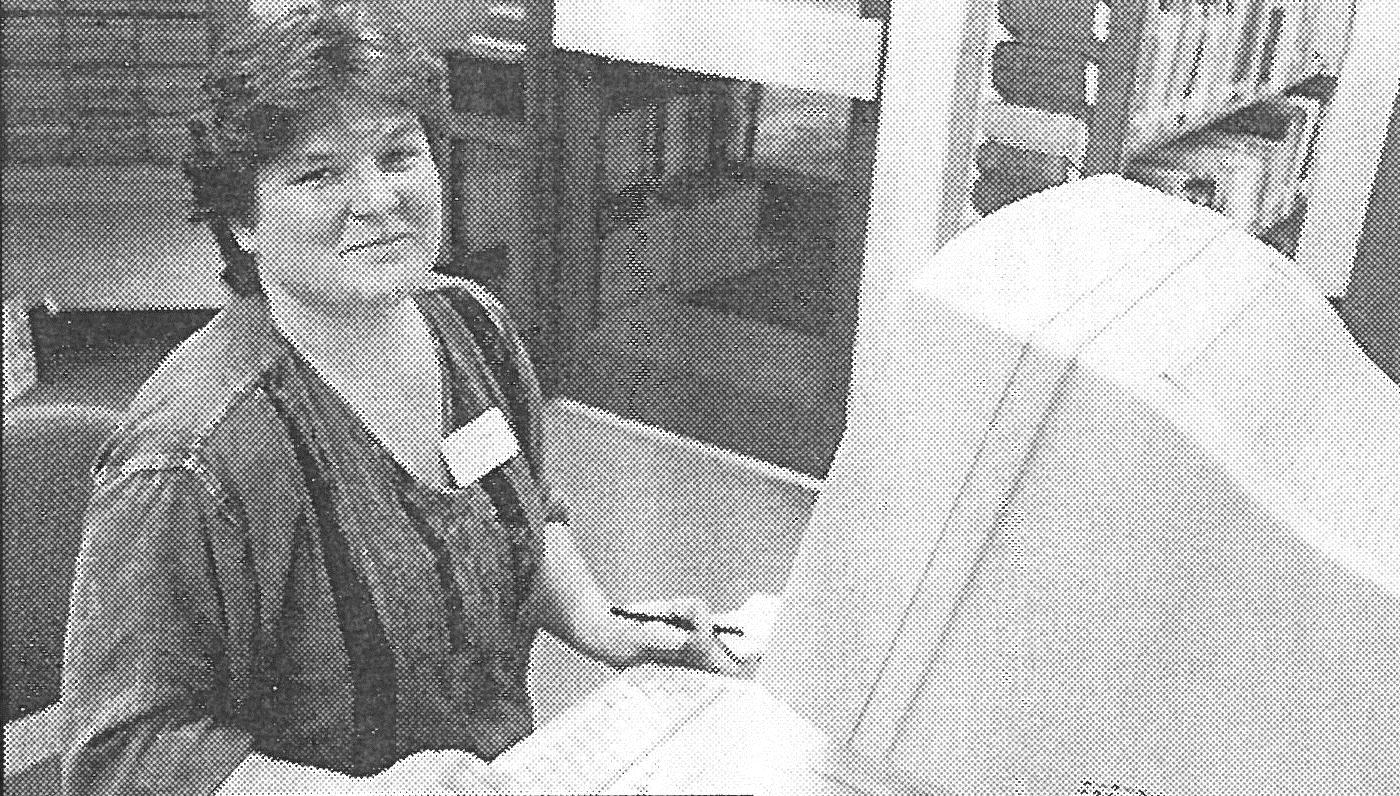 At Halifax Public Libraries, people are at the heart of all we do. Staff members are the driving force behind this philosophy, and our team in Hubbards is no exception.

Cathy grew up in Halifax, but her family always had a summer home in Queensland.

"We used to use the Book Mobile! It came closer to where I lived than the distance to the Library."

When Cathy did get to go to the Library as a child, she always loved it. As she grew older and moved to Queensland year-round in 1985, she began bringing her son to kids' programs at J.D.S.

Then, in 1992, she got her big break. Cathy became a back-up clerk at the Library—"something like six hours a week." Her role was to help with anything and everything from shelving books to running programs. Cathy mostly ran programs for children: crafts and storytimes. "We did all kinds of things in an hour. Whatever you could think of!"

Cathy has been at J.D. Shatford Memorial Public Library ever since. In the past 27 years, the branch has seen its fair share of changes—from renovations and staffing to the ways people use the space.

"It’s used in such a different way. Back then, we had a reference section, as students would come in to get help with homework. At that time, with a lack of internet, people were looking for information. A lot of your work was researching things for people by using encyclopedias and such."

VHSes were also very popular loans, before the age of DVDs.

When computers were added in 1998, the branch went from having about six bays of reference materials to—over time—now having only two shelves. People are coming in to use the computers for research, activities, and entertainment.

However, there's still a clear love of reading in the air. J.D.S. sees great circulation on books every year.

Another thing that hasn't changed?

"It is a very social community space. It’s well-loved in the community. It’s a place where people come to see other people. In some ways, it's really the hub of the community and has been for a long time.

People don’t actually realize that we are turning 50. They’re surprised that we’ve been open that long!"

At 2,700 square feet, J.D. Shatford Memorial Public Library is smaller than our average library. But, it's clearly a cornerstone of its community.

When the branch opens, there's never a dull moment. Cathy is typically the person you'll see at the Info Desk, greeting community members and supporting staff.

On weekdays, by 3:00pm, "it's full on." School-aged children walk or bike to the Library in the afternoon to use the computers and pick up books. On Friday mornings, the branch can see up to 70 people in the space. Staff has enjoyed expanding some summer programming into the great outdoors to meet the demand.

"We don’t have a lot of staff turnover at this branch," Cathy says. "And I think that’s an indication of what a good place it is to work. It indicates how much people love it."

In 1974, Marlene Dorey started working at the branch, and stayed for 38 years. Coincidentally, her mother Sadie had worked at the Gainsborough Hotel, which was previously on the Library site, from 1884-1944. Joanne Eldershaw just retired last August after eighteen years. "We used to joke that she was related to everyone in the Hubbards, Mill Cove area," says Cathy.

"They were both great sources of local history and geneaology. When new people moved here, they could often tell them who had lived in the house they just bought, going back years and years."

Many of the small group of staff members at J.D.S. live within biking distance of the branch.

"We naturally have a personal stake in making our community better," says Jo, a staff member at J.D.S. "Patrons (who we're not related to or don't know personally) quickly become acquaintances, so we get to know them very well, which enables us to anticipate their needs and delight them with suggestions or recommendations, or even door-to-door deliveries."

A unique place, a unique Library

"Hubbards is a very welcoming community," Cathy says. "It’s really a growing community with young families. We’ve seen that change."
There is a high senior population in Hubbards as well, and the community has great seaside appeal.

"In the summertime, it’s so much busier with all the vacationers who come into town. The place really livens up. There's so much activity with The Shore Club, cottage rentals, artistic festivals, and The Barn market."

Hubbards is known as an artistic centre in Nova Scotia, and Library programming and displays often reflect this vibe.

"For example, we just hosted the book launch for the Aspotogan Art & Crafts' , opens a new windowABCs. 26 local artists each did a letter of the alphabet and painted a picture to go in the book." Cathy also notes that some of the Library's most well-attended programs have been skill-sharing workshops hosted by local artists and artisans.

The popularity, past and present, of J.D.S.' Scrabble Group, Baby & Tot Time play group, and Author Readings—they've welcomed authors like Alistair MacLeod, George Elliott Clarke, and Lesley Crewe—also speak to the interests and demographics of the community. "Many of our programs give a way for new residents and families to get to know people in the community."

Jo, who started the Baby & Tot Time in 2012, says her favourite experiences now stem from that group, "because I've been able to watch tiny Library babies grow up into Library toddlers and now Library ten-year-olds. When I go to their schools on Library visits, I feel like a celebrity rockstar because a lot of them know me by name."

Colleen, who also works at the branch, says: “For a small branch, we do a lot of programs. Some of my favourites are the puppet shows—especially when we do a puppet petting zoo. It’s so enjoyable to watch the children interact with the puppets. And we’re probably the last branch that still shows 16mm films because of popular demand. The parents like it because it brings them back to their childhood, and the kids like the watching the projector sometimes more than the film itself.”

With the ever-changing and adapting modern Library, Halifax Public Libraries has been expanding its collection Beyond Books. "Hubbards has really been taking advantage of the instruments. The radon detectors, too!,"says Cathy.

Hopes for the future

We are looking ahead to the future, and things in Hubbards are not slowing down. With recent upgrades to the branch, like fresh paint, reconfigured staff space, art installations, a digital advertising screen, and a heat pump, Halifax Public Libraries is working to honour J.D. Shatford Memorial Public Library's history while modernizing to best serve the community.

"We are going to keep moving forward and seeing what the community wants from us. I think it's important to keep in touch and see what their needs are," says Cathy.

It's clear that the staff at J.D. Shatford live this vision through their work, and their lives in the community. It's not uncommon for staff to be in the grocery store, at the market, or out for a walk, and end up jotting down holds requests and renewals from library users. They're the unofficial 'walking libraries' of the community.

Thank you to the team at J.D.S now, and over the years, for making this branch the community hub and heart that it is today.