Across the Dartmouth, Halifax, County, Bedford, and HRM Fire Departments, there are photos of everything from training, outreach, ladder demonstrations, the aftermath of fire scenes, to firefighters in the act of battling blazes.

Many of our photographs of stations also include some type of display of the firetrucks themselves. Though I am by no means an expert, it is fascinating to see how the trucks have changed over the years. 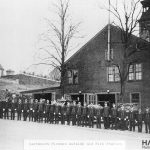 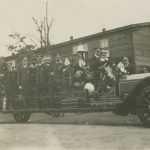 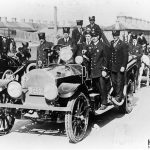 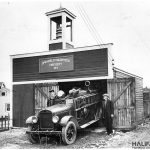 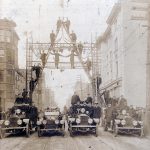 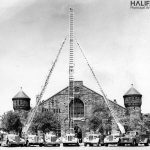 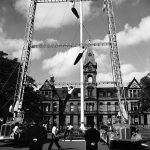 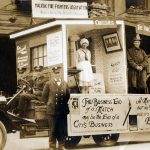 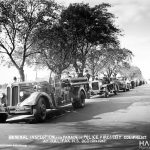 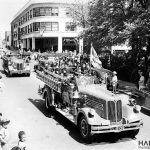 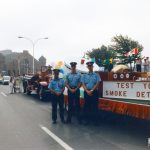 Finally, many of the most arresting photographs in the Halifax Fire Department series are of firefighters on scene and in action, as well as some that depict the aftermath of fires. They can be quite dramatic, and even distressing, but they can also be valuable sources of information regarding equipment and procedure. These photos can also show former buildings and streetscapes in Halifax, providing incidental but interesting historical information. 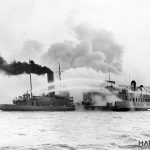 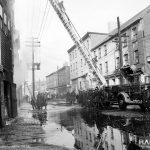 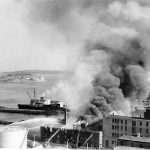 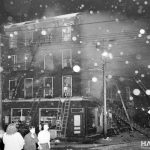 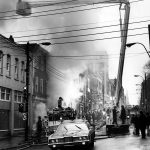 By far the bulk of textual records that Halifax Municipal Archives has on firefighting comes from the Halifax Fire Department, with some of the records dating back to the early fire-fighting units such as the Union Engine Company in the mid-1800s.

Another great resource is the Halifax Fire Department’s records of fires, opens a new window. These ledgers recording calls attended by the City of Halifax Fire Department, called "companies records," and "records of fires," span 1903-1917, 1919-1922, 1931-1939, 1946-1980. The companies’ records include the date, time, address of fire, number of ladders raised and the gallons of chemicals used.

Many of the personnel files from the Halifax Fire Department are still restricted due to personal information, but records that were created over 100 years ago are available to access. We love this letter from Union Engine Company, No. 2 Division commending their first and second officers for “gallant conduct and untiring exertions.” For their conduct in “the hour of danger,” the officers received firemen’s badges from the company.

And, we couldn’t possibly finish this post without mentioning the Halifax Fire Historical Society, opens a new window, another excellent resource for HRM firefighting history! The firefighters involved in this community group love to share their vast knowledge.

Contact archives@halifax.ca to request a research visit or copies of any of our records.