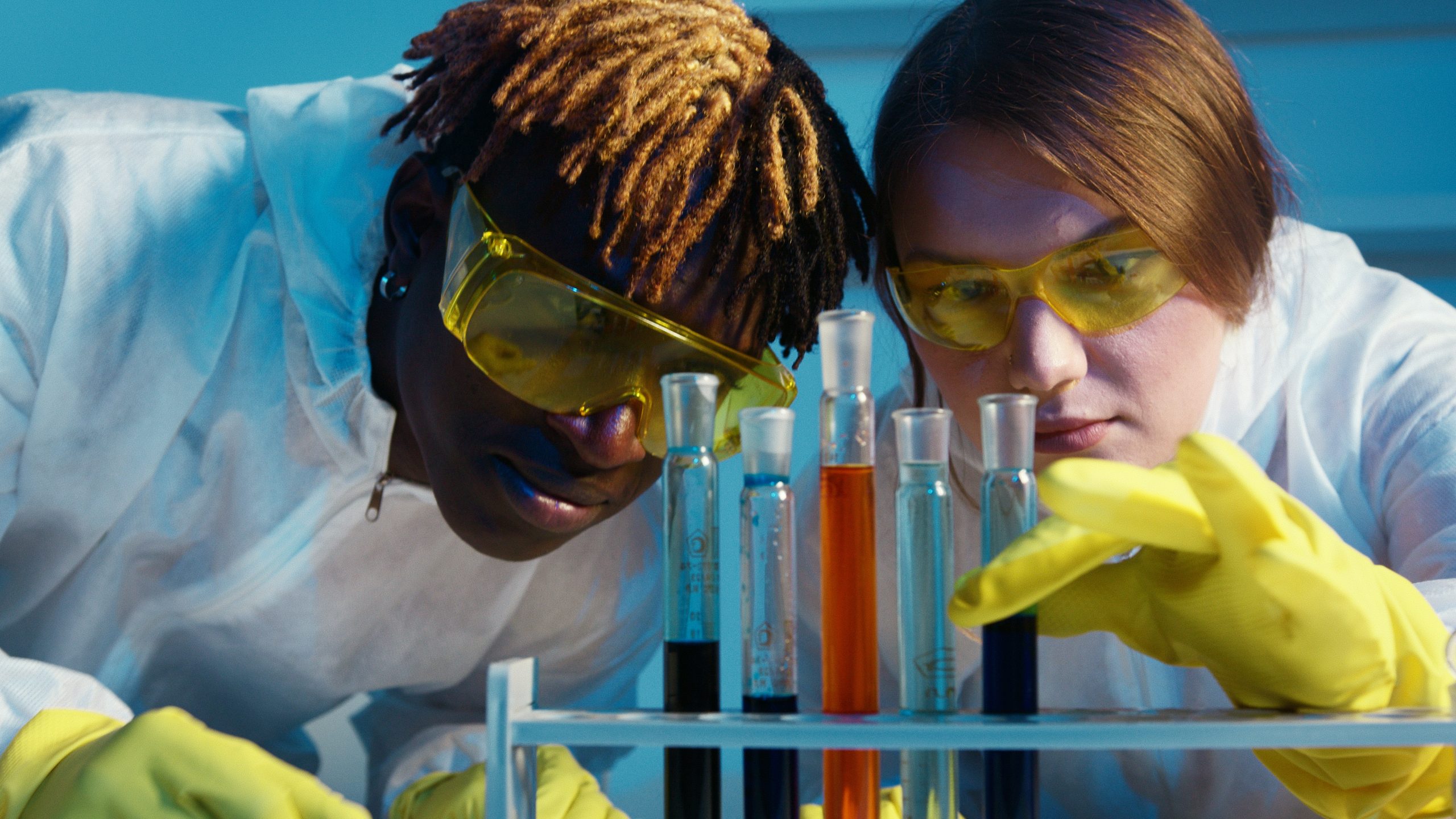 In the spirit of Mini-Con, opens a new window, the Library loves to share stories that are out-of-this-world! For a tale that will have you on the edge of your seat, check out Teen Blogger Sally's latest short story.

It All Started in the Lab

My eyes had found the clock, it read 4:52pm. We had been scheduled to use the lab from 3:00 to 5:00. I looked over at Reid, his head was tilted down to view our beaker. We were trying to get the pH to change to a certain level and for some reason, we had not been able to get it right during class. Our teacher, Mr. Travis, allowed my lab partner Reid and I to redo the experiment after school.

“Gwen, I don’t think this is happening today, maybe we can ask Mr. Travis to try again?”

“He probably won’t want that,” I replied quietly as Reid began putting away the equipment. I heard the other occupants of the room shuffle around so I turned to look over at them. Josie and Oliver were the only other people in the class who also hadn’t gotten the experiment right.

“Hey,” Reid said, causing my head to twist around quickly to see him. “You’re always in another world.”

“Whenever we’re in class, it always seems like something else is on your mind.”

“Oh, yeah I guess…,” I said tentatively. The truth was, we were in an advanced chemistry class, it was mostly 11th and 12th graders, and Reid and I were the only ones in 10th grade. The work was definitely harder than what I was used to and for the first time, I didn’t pick up on everything quickly. Before my mind could drift away again, I heard a small crash coming from Josie and Oliver’s direction. Everything went black.

It must've only been a few seconds, but when I woke up, everything felt different. Even the air, for the first time in over a month, hadn’t felt clouded by stress. I looked around to see Reid sitting up next to me, he had been rubbing his eyes and I leaned over and asked, “You okay?”

“Yeah...that was weird,” he commented as he pulled himself up to stand, he offered me his hand which I took to stand up too. We silently made our way over to the other lab partner’s table.

“What happened?” I asked Josie.

“Oliver happened,” she responded with a shake of her head, “he knocked over the beaker….” She stopped short of what she had been saying as she turned to look over at Oliver.

“Where’s the beaker?” he asked as he scanned the floor in front of him.

“It was right here,” Josie said as she knelt down by him to search under the table. Reid and I shared a look, things were definitely different. I checked the time on my phone that had been resting in my pocket, it was 4:59pm.

“What are we supposed to tell Mr. Travis about the beaker?” Oliver asked the group.

“I feel like that’s the least of our problems...how about the fact that we passed out?” Reid replied. I bit my lip in nervousness and I rubbed my hands together, it was something I did in any anxiety-filled situation. Out of the corner of my eye, I saw Reid’s eyes glance down at my hands and I suddenly felt a tiny gust of air, followed by a tingling sensation. I looked down to see a fire—a fire! I quickly dropped my hands down to my sides and it disappeared.

“What just happened?” Josie asked, all I could do was shrug. We heard the door open and we all swung our heads to face our teacher in the doorway. Mr. Travis rushed us out of the lab since the custodian was coming in soon, he informed us that he’d clean up.

“Gwen, what were you doing? Did you have a match?” Reid asked once we made our way outside.

“Nope...how would I have even lit that?” Reid merely shrugged his shoulders at my answer.

“Do it again,” Oliver suggested. I brought my hands together once more and just as before, a small flame appeared. It went away as soon as I pulled my hands apart.

“That’s so weird...” Josie commented, everyone seemed transfixed on my hands as I did it again while checking around us to make sure nobody else was nearby. Luckily the school was pretty empty by 5:00pm.

“I feel like this is a stupid question...but you couldn’t do this before today, could you?” Reid asked and I shook my head. The shock finally caught up to me as I felt my heart race underneath my chest slightly, as interesting as it all was, something was wrong with me.

“Let’s just keep this between us, alright?” Josie suggested and we followed her statement with a nod. Just as we were about to part ways, Reid tripped over a rock but instead of falling, his whole body just hovered in the air. It only lasted for a few seconds as he flailed around and let himself fall fully. Josie and Oliver seemed too shocked to move so I leant down to help him up.

“Now this is really weird,” was all Reid, or anyone, could say at that moment.

It was the next day before any of us communicated again. I spent the morning at school deep in my own world that I hadn’t even acknowledged the existence of until Reid said something about it. At lunchtime, Josie found me sitting at my typical table.

“Gwen, come with me!” She whisper-shouted. I said a quick goodbye to my friend Caitlin before getting up to follow Josie, she brought me outside and towards the edge of the school. Reid and Oliver were leaning against a tree when we arrived.

“Something happened when I got home yesterday,” Josie told us and before anyone could ask for further information, she pulled out a bottle of water from the backpack she had been wearing. I sent a glance over to Oliver and Reid who seemed just as confused, but once she opened the bottle we all understood. She was able to control the water’s path with her hand for a couple of seconds once she tried pouring some out.

“You too?” Reid asked her, surprise coating his face.

“Okay...I know this may be serious, but what about me?” Oliver asked.

“What do you mean?” I questioned.

“All three of you have powers, or whatever this is, what about me?”

“I wouldn’t consider any of this to be a positive…” Reid said.

“That’s just Oliver guys...ignore him,” Josie said along with a shake of her head. After a few minutes plagued with disbelief, we began walking back towards the school but before long, I heard Reid’s breath hitch from beside me. I looked at him but he was turned around so I joined his glance and that’s when I saw it. Oliver had created an icicle, which had been hanging from his hand. Josie, Reid and I were worried but Oliver was as giddy as can be. Josie knocked the icicle out of his hand and attempted to crush it into the ground somehow. It was a Thursday in October, definitely not icicle season, so we hoped that it would melt into the grass. We chose not to make any hasty decisions while we were full of confusion so we continued on our journey back to the school.

“Wait…” Oliver said as he stopped us with an outstretched hand, “Is this our origin story? Like...as superheroes or something?” His question seemed utterly ridiculous which meant that it brought out laughter in all four of us.

As much as we laughed that day, our lives shifted unexplainably. Soon, me and my would-be closest friends became something. Something equally wondrous as it was scary.

We became the four wonders of the world.

Inspired by Sally's story and want to write your own short stories? See Sally's blog post, opens a new window for tips on where to start.

My name is Sally. I am 17 years old and in grade 11. My hobbies include reading, playing violin, and of course, writing stories. It has become one of my favourite hobbies over the past year.