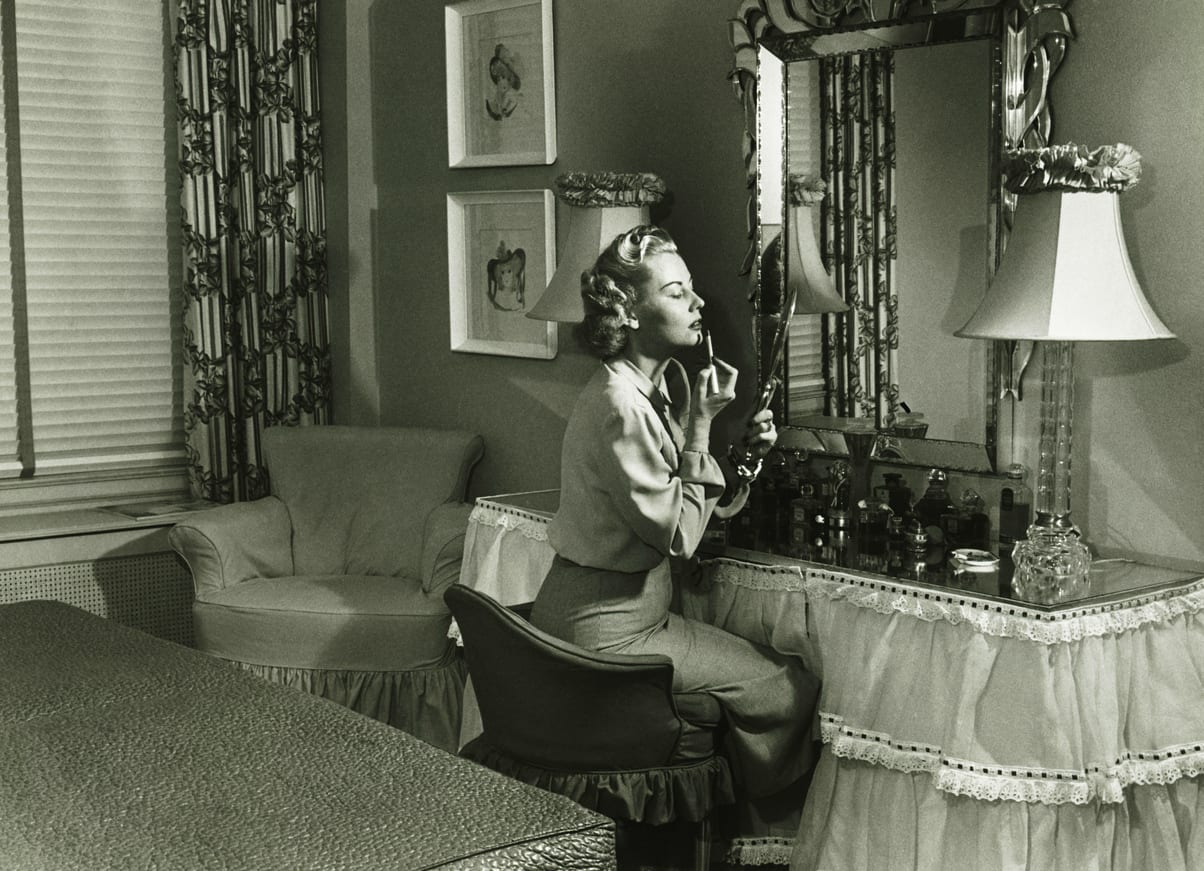 If you're anything like me, you probably wonder a lot. Every day as I do my makeup I wonder: "Where did this come from? What does this mean? Why is this still a thing?"

So, for all of us makeup lovers (or just people who are curious about makeup), I’ve decided to do some research and give you a brief timeline on the history of makeup. 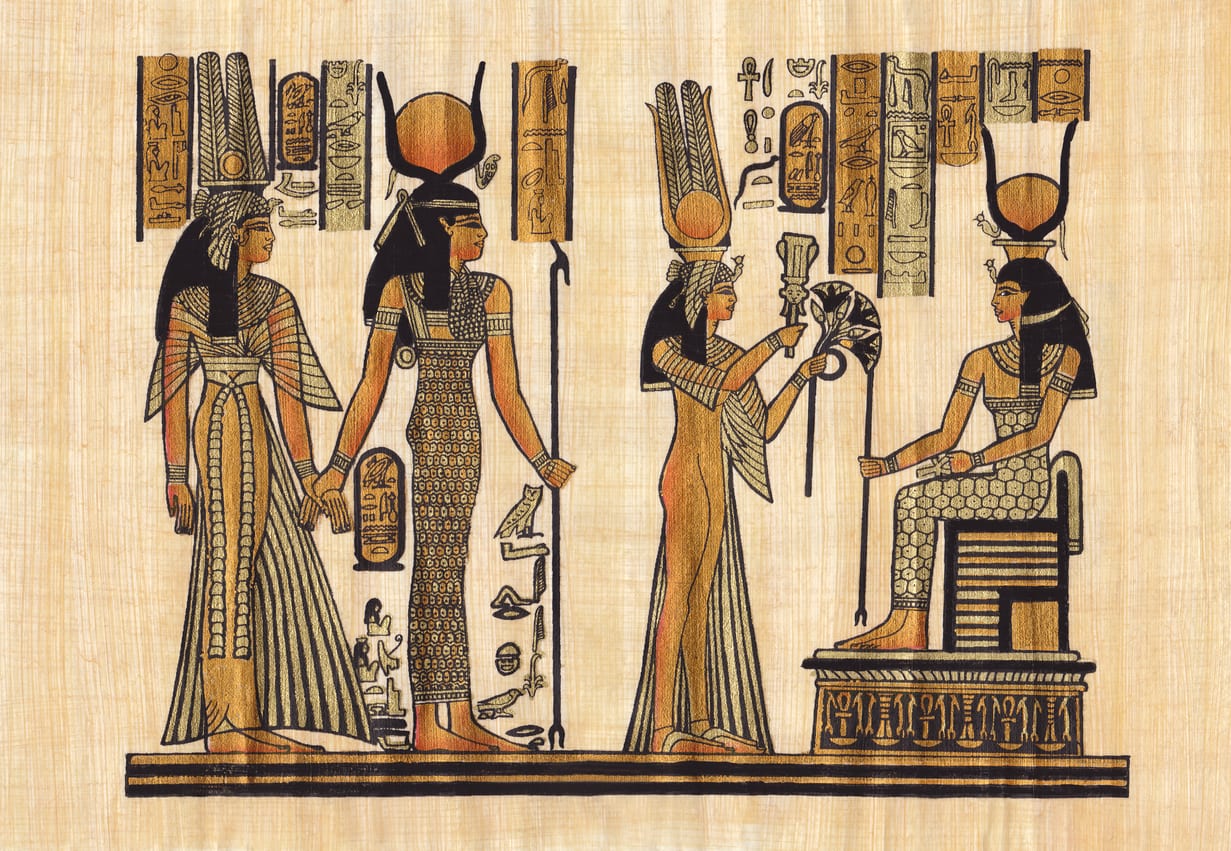 Makeup dates all the way back to 6000 BCE, starting with the Egyptians. They created it as they believed makeup was next to godliness and that it appealed to the Gods; both men and women of all social classes wore makeup. It was also used to represent their wealth, which is a pattern we’ll see continuing for thousands of years. As makeup was available to everyone in Egypt at the time, it was more so the applicators and storage containers that symbolized a person's wealth rather than the makeup itself. Many poor peasants relied on clay pots and sticks to store and apply their makeup, while the wealthy had access to delicately created boxes and applicators often bejewelled and made of ivory.

The most popular makeup that the Egyptians were known for was kohl, which is similar to black eye shadow but used to line the eyes, usually made from a grey ore called galena. Kohl is still used to this day, although back then it was commonly paired with blue or green eye shadow (Grepond eye paint) but now can be paired with anything. They also wore red lipstick, which was made by mixing fat and red ochre. The ancient Egyptians also didn’t limit beauty to their faces, often using henna to stain their fingertips and toes. 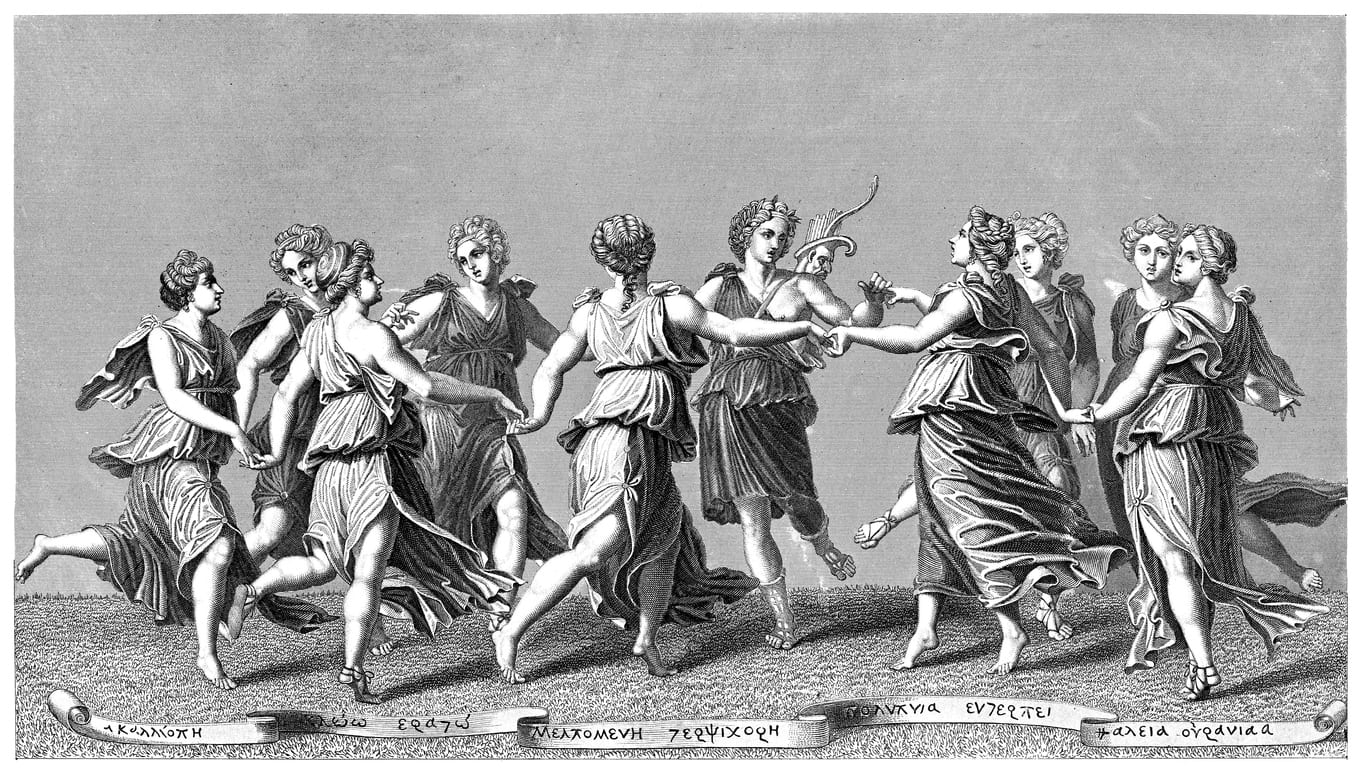 By this time, people in ancient Greece and Rome began wearing makeup. For them, they strived to achieve a more "natural" look. Women wore light touches of colour on their cheeks and lips, created by mixing plants or fruits with lead-based dyes and mercury (which is now considered toxic). They also wore light powder foundations, at times, but mostly made sure their natural skin was flawless by using honey and olive oil in their various skincare products; like a moisturizer and cleanser.

The only things "less natural" about makeup in ancient Greece were the eyes and eyebrows. Olive oil and charcoal were often used to make eyebrows bolder and to darken around the eyes. 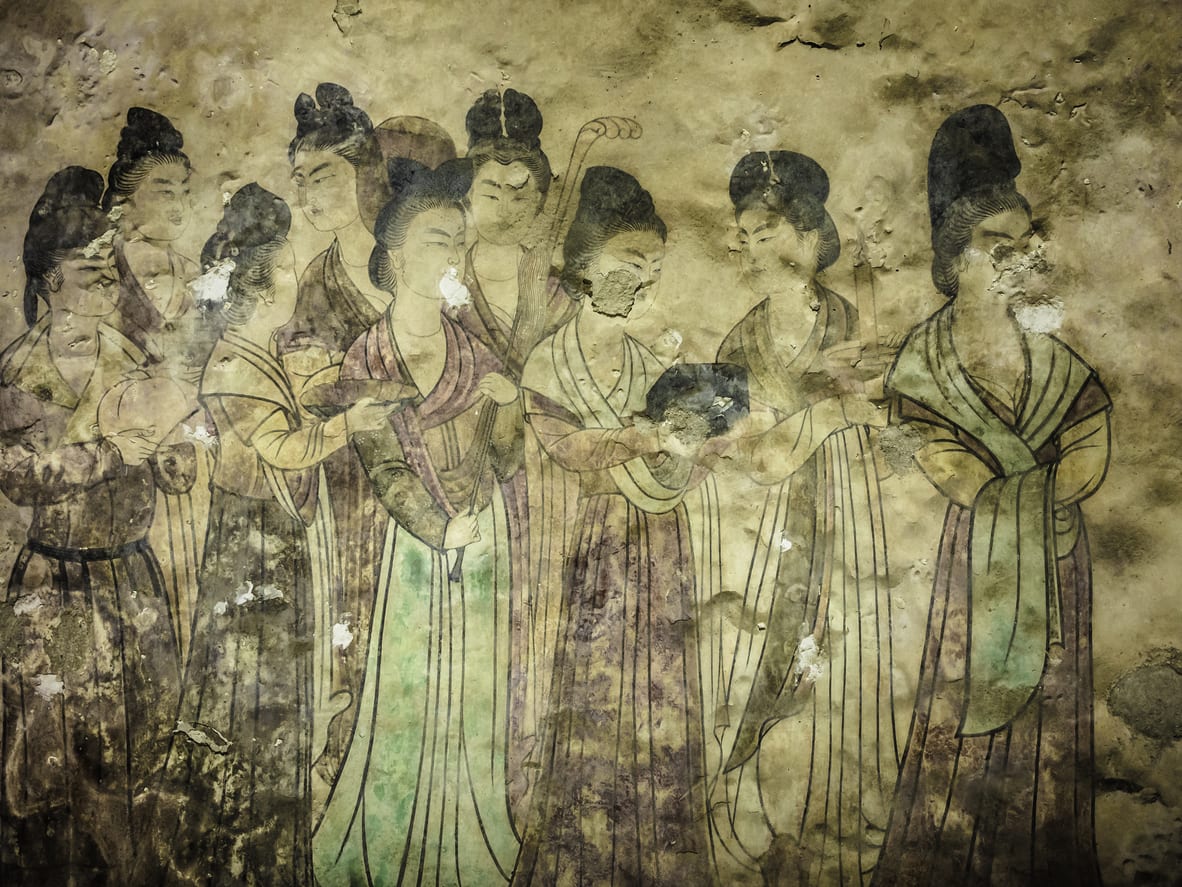 Throughout this period, Chinese royalty used nail polish to represent their social status. High-ranking leaders wore silver or gold, low-ranking leaders wore black or red, and the poorer classes were forbidden to wear any nail polish at all. Around 600 CE, Chinese women began to use very light-coloured foundations, which were usually made up of a very white powder, to distinguish themselves from the working classes. They also wore strong red powder on their cheeks and darkened their eyebrows.

The pigments used in most of their cosmetics at the time were created by boiling plants, animal fats, and spices. They also commonly painted their lips in a red heart shape using vermillion.

Ancient China was one of the first to have fast-changing beauty trends, with many of the early dynasties focusing on the changing shapes and colours of their eyebrows. Most eyebrow trends were created throughout the Tang Dynasty (618-907 AD). 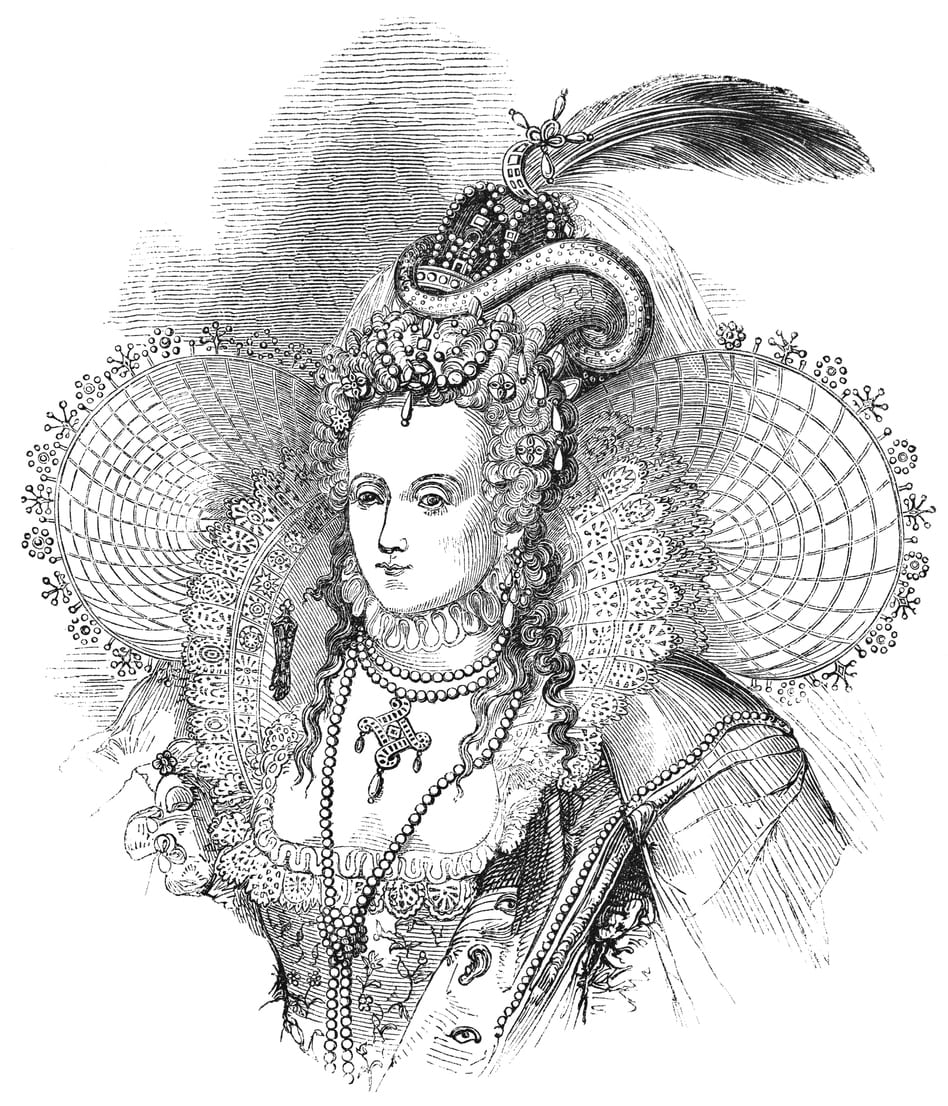 During this time Christian writers began to create an association between makeup and deception. Women began to work on skincare to give the appearance of naturally flawless skin using homemade recipes.

Suddenly during the 1550s, everything changed when the Elizabethan concept of beauty gained popularity. Every woman began plucking their eyebrows to give the illusion of having a big forehead, whitened their skin using ceruse (vinegar and white lead), and coloured their cheeks and lips with egg whites, ochres, and even mercury. These beauty trends caused various dangers to women's health and played a major role in bringing the life expectancy down to 29 years.

Another Queen who influenced beauty trends, only this time it was against them all, was Queen Victoria who believed that makeup was unladylike and vulgar. This created a backlash against wearing makeup that is arguably still seen in the world today. At this time, women began pinching their cheeks and biting their lips to give themselves a rose-coloured look. Many women who continued to wear makeup were looked down upon and considered prostitutes.

During the 1920s, the "looks" of the Hollywood movie star began encouraging women to wear makeup. This caused the beauty industry to flourish and makeup began to be sold to the masses (and continues to in the present-day). This led to unique beauty trends such as the red lipstick of the 1950s and the thin eyebrows of the 1990s. 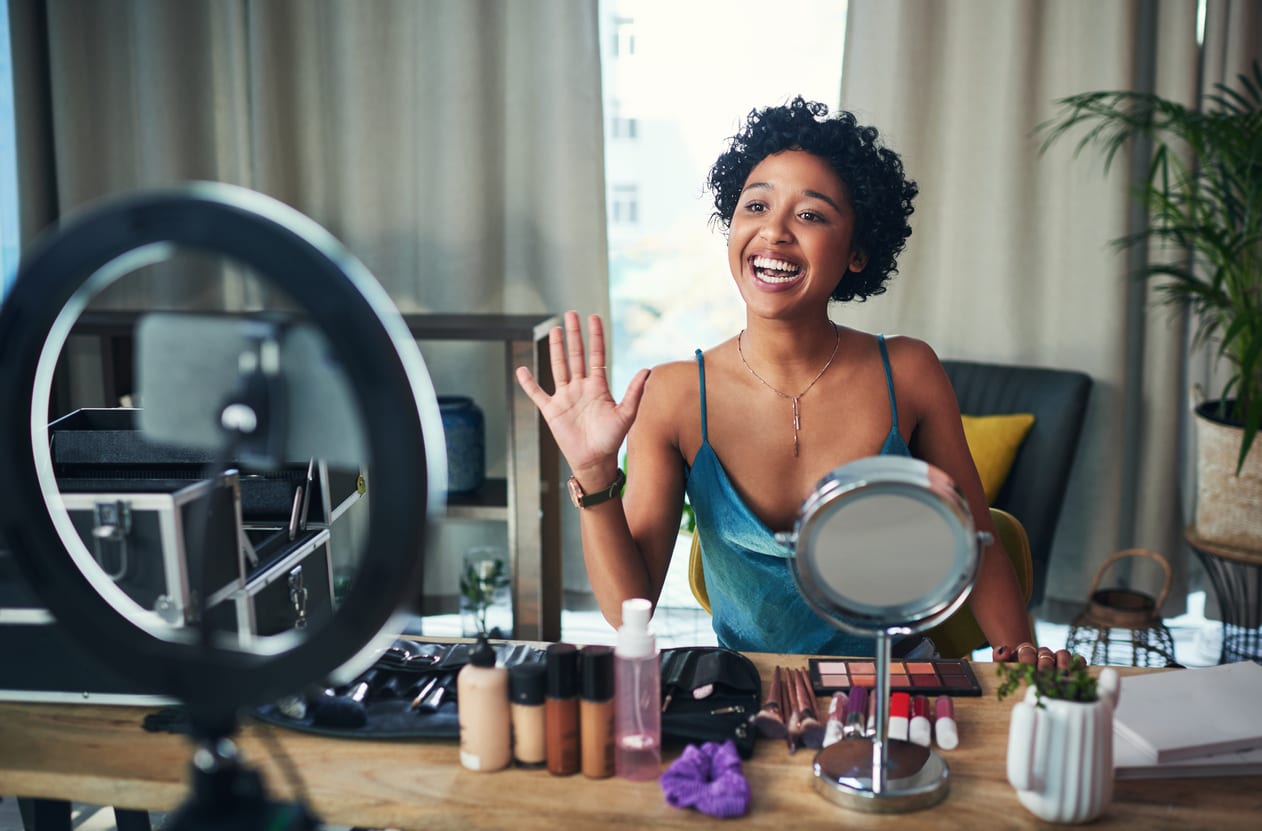 In the world we know today, our thoughts on makeup are more open than ever before. This only happened recently, as even just a decade ago our world was focused on tearing down even the most famous of celebrities for their looks through social media. Now, however, makeup is being promoted to everyone of every race, gender, and class through social media. Makeup has turned into whatever anyone wants it to be. People can wear no makeup, colourful makeup looks, create their own makeup brands, and even have a career in makeup artistry.

Do I think that our modern perception of beauty is as perfect as it may look compared to the history of makeup? No, but I believe that we're getting there and getting there fast. I personally love makeup and skincare, it's basically my only hobby these days! My social media "for you" and "explore" pages are overflowing every day with hundreds of women and men of any age trying out different makeup looks and encouraging others to do the same.

I have come to realize that even my parents grew up in a world with limits and rules on beauty, but as someone who is part of the newer generation, I have been exposed to both limits and open-mindedness on makeup and beauty, which is exactly why I believe we are getting there. Especially over the past year, I have learned how to wear makeup for myself, learned that it is not a necessity for anyone to wear makeup, and that makeup is (to me) fun!

I have never been more fascinated than I have when learning about the history of makeup. After this, I wish they had included it in my history course! The fact that we are part of a time where makeup can be anything we want it to still amaze me, especially after how long it took to get here!

If you want to find out more about the history of makeup I would recommend reading some of the books available at Halifax Public Libraries such as The American Duchess Guide to 18th Century Beauty by Lauren Stowell.

Interested in learning more? Check out these websites I used to source information:

Beauty and Cosmetics in Ancient Egypt, opens a new window

The History of Makeup, opens a new window

My name is Jood Shikara and I’m 16 years old. I have a dwarf hamster named Sesame who lives luxuriously. My life these days tends to centre around him and I am not mad about it! I’ve always thought learning was really fun but I like learning specifically about things that they don't teach you in school, like how to take care of a hamster! I love trying and learning about different styles of art because I want to channel my creativity in new and interesting ways.