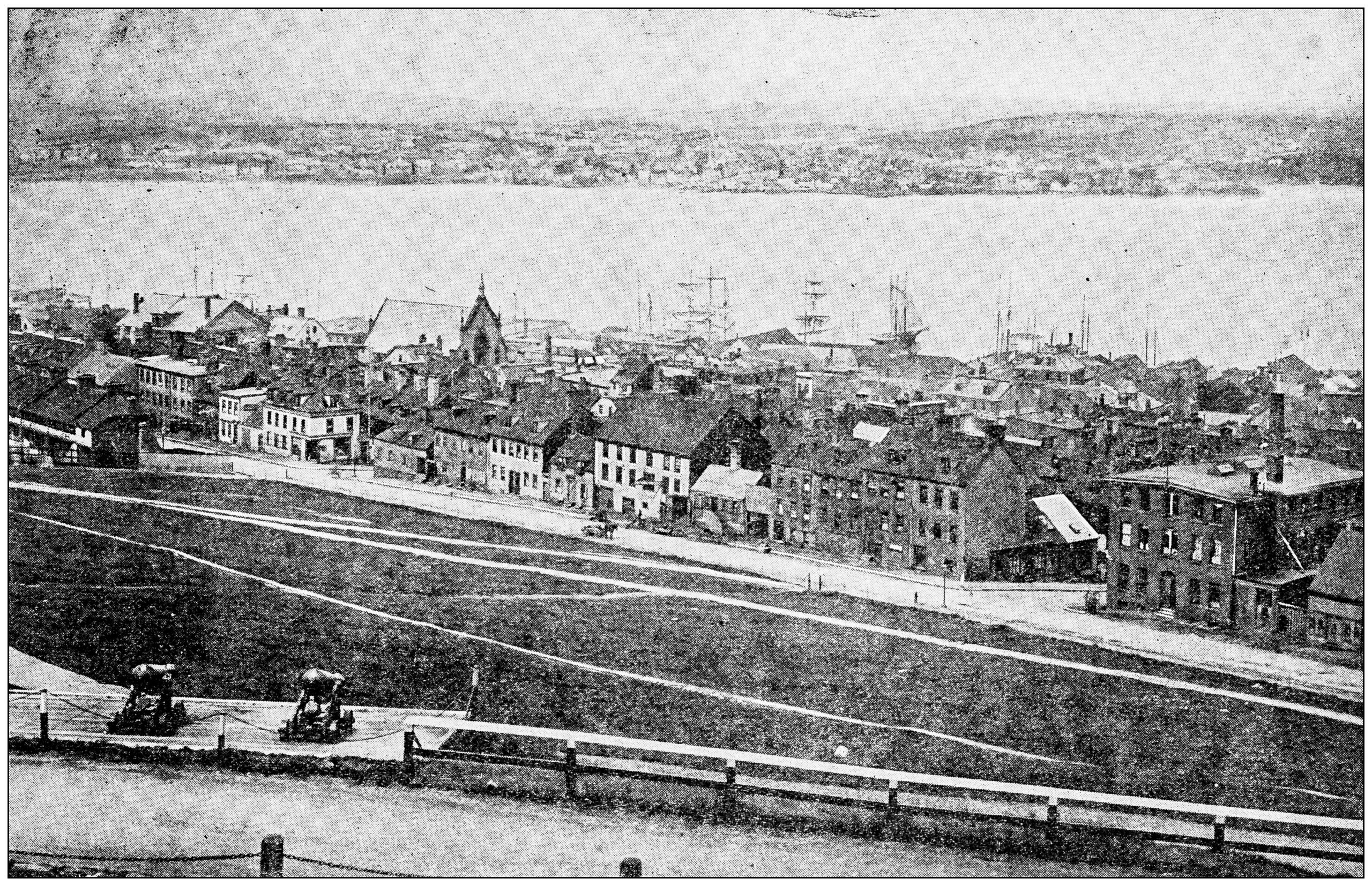 Lately, there has been a surge of interest in how local streets got their names. Sometimes this is prompted by general curiosity, but many people want to know who is being commemorated in street and asset naming, and why. In some cases, it is clear who a street is named after and their connection to the area, such as with Cornwallis Street. What can be less clear, however, is how and when the decision was made to commemorate that person.

When researchers investigate a street name at Halifax Municipal Archives, one thing is clear: the former municipalities of Dartmouth, Bedford, Halifax County, and the City of Halifax did not always have clear procedures in place for deciding on street names. Because of this, it can be quite difficult to figure out when and why streets were named. We might have a pretty good hunch that a street was named for, say, a former British politician, but it can be hard to prove. In fact, it can be even harder to know exactly who made the decision and their exact reasoning for doing so.

When we get queries regarding street naming, there are a few key sources that we turn to. We use City Directories, opens a new window, which are organized by last name as well as street, and can help with determining when a street was first listed, as well as where it began and ended in a given year.

We also turn to Council minutes, opens a new window for the relevant municipality, especially since they are all digitized and searchable online. If streets were formally named or re-named, it often went to Council – though not always! Sometimes these minutes also indicate that there were submissions to Council, like letters or petitions from the public or a report from City staff, which can give additional context.

This excerpt of the Halifax City Council minutes from April 10, 1843 – two years after Halifax was incorporated – states that “the streets in the said City shall continue to be called, and to have, the names  by which they are now respectively known.”

This Halifax City Council minute from July 4, 1859, shows a report from the Committee on the Common regarding the names of streets around the Common. Here they name Summer, Bell, Park, Cogswell, South, Jubilee, and note that Spring Garden and Morris will retain their names. If a researcher was particularly enthusiastic about the origins of those names, it’s possible that more discussion regarding this report and those decisions would be found in the records for the Committee on Public Parks, Gardens, and Commons, opens a new window.

This Halifax City Council minute from February 23, 1888 references a petition from the residents of Albemarle Street asking to rename the street Empress. The motion is granted, although it doesn’t seem we ever ended up with an Empress Street.

Interestingly, a disconnected portion of Market Street was renamed Albemarle Street in 2007, as a reference to this early Halifax street.

In 1950, the Town Planning Board recommended to Halifax City Council that a new street in the Westmount subdivision be known as “Jack Ferguson Avenue” and Alderman Vaughan raises the interesting point that the “use of a Christian name” could be confusing to postal workers. This gives a great peek into some of the issues when naming streets that we may not always think of – you can see how it might be confusing to postal workers, similar to recent efforts to ensure civic addresses don’t hinder the ability for emergency services to respond swiftly to emergencies.

Westmount subdivision is also significant for being a unique example of an entire subdivision being named commemoratively. Halifax architect and army veteran J. Philip Dumaresq was appointed to develop the subdivision, and Dumaresq, a veteran himself, lobbied to have the streets named after local service personnel. A 2013 change to the street signs highlighted this by adding signs with “Lest We Forget” and poppies above the street name signs in the neighbourhood. You can learn more about the neighbourhood and the people who the streets are named for on HRM’s Cultural Districts page here, opens a new window.

This Halifax City Council minute shows the criteria that Aldermen considered when changing Miller Street to Point Pleasant Drive. Apparently, the original name came from a property called Miller’s Field, and the new name is accepted even without a petition from the residents.

This Council minute that lists the Woodside Ratepayer’s Association suggestions for name changes gives us a sense of the process for street name changes in Dartmouth, even if it doesn’t reveal why the new names were chosen.

The Engineering and Works Department’s subject file on Maynard Street includes property acquisition information, sidewalk repairs, and this news clipping about the renaming of part of Maynard Street as Fuller Terrace.

An interesting example of how street name changes can reflect social change, the above image shows the first page of a petition to rename the residential segment of Gottingen Street to Novalea Drive from residents and homeowners in the area, laying out their reasons for wanting the change.

Another useful tool used to trace the history of street names is the Archive's historical maps and plans. We have very few plans that are specifically about renaming streets, but any map with streets listed helps to give a timeline of street boundaries and names at various points in time.

For instance, not too long ago someone asked how the streets in the Hydrostone got their names. It had originally seemed that many of the names – such as Cabot, Sebastian, Columbus, Stanley, Livingstone, and Stairs – may have been decided by the Halifax Relief Commission, whose records are at the Nova Scotia Archives. Other street names in the area, however, such as Merkel and Hennessey, turned up on a few early maps (shown below) of property being divided and expropriated for City use. While the maps may not explicitly confirm it, we can take a guess that this is where the names for Merkel Street and Hennessey Street likely came from.

This page from the 1878 City Atlas shows the lands of the Merkel Estate between Gottingen Street and Longard Road – now Robie Street.

A later map from 1890 shows the division of “Merkels Fields” into lots, which were later sold, and proposed streets, including the names of the streets we had recently been asked about. This uncovered another piece of the street-naming puzzle for the Hydrostone area – those names existed prior to the Explosion, and prior to the Halifax Relief Commission. It seems as though they, once again, came from the original developer of the Merkels Fields area.

On both the City Atlas and map V-4-3299 you can also see the boundaries of the Hennessey property, which also lends its name to a current Halifax street. Shown below is map F-7-1040, which shows the land expropriated in 1898 from the “Misses Hennessey” for the extension of Agricola Street.

There are a few other sources at the Archives that we can turn to for hints when researching street naming. Often times, Archives staff members reach out to Civic Addressing staff for any historical information they might have.

While each of these files has some interesting information and stories, they rarely list source material – the City Clerk file’s note on Dresden Row begins with “legend has it”! – and so there’s always a bit of additional research to do to confirm.

There are currently two useful secondary sources that provide information on local street naming available at the Halifax Public Libraries.The first being the History of Dartmouth , opens a new windowseries by Douglas William Trider, a four-volume history of Dartmouth that gives supporting evidence for who was commemorated by street names.

History of Dartmouth/district Families and Halifax Harbour 1800 to 1850

History of Dartmouth/District Families and Halifax Harbour 1851 to 1873

Halifax Street Names, opens a new window, edited by Shelagh Mackenzie, has 60 contributors, so a variety of sources and community knowledge was used to piece together the history of many street names, including some Dartmouth streets. Mackenzie notes that of the long-standing practice of developers choosing names for their own development, a practice which continues today – such as with the European cities’ section of the Willow Park Subdivision, named by Col. Bennet Henderson Hornsby in the 1870s. Mackenzie also mentions that many streets were never formally named, but instead were named after property owners or estates, like the Hennessey family mentioned above.

Today, Halifax Regional Municipality has a Commemorative Asset Naming Committee to help with the process of choosing street, park, park features, and building names. Anyone can submit the name of notable people or groups, historic events, geographic features, or native flora and fauna. The Committee then reviews the names and supporting documentation, and brings their recommendations to Council. Names that Council approves are added to a list – found here, opens a new window – that developers and municipal staff must choose from when naming new assets. Developers must choose half their street names from the Commemorative Names list in any new development.

Do you know someone or something that should have a street named in commemoration? Fill out this form, opens a new window and submit a name – or several – for the opportunity to help name HRM's latest local projects!