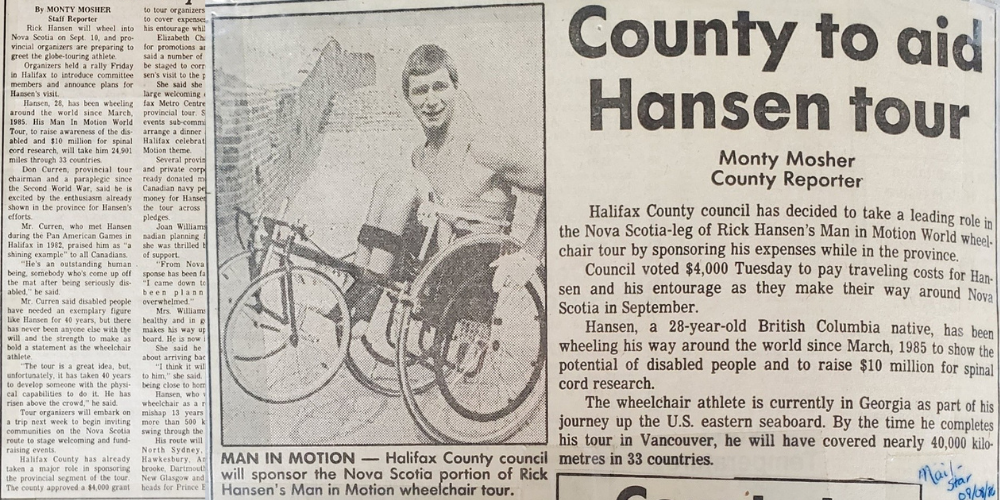 Transcript:
Halifax County council has decided to take a leading role in the Nova Scotia-leg of Rick Hansen’s Man in Motion World wheelchair tour by sponsoring his expenses while in the province.

Council voted $4,000 Tuesday to pay traveling costs for Hansen and his entourage as they make their way around Nova Scotia in September.

Hansen, a 28-year-old British Colombia native, has been wheeling his way around the world since March, 1985 to show the potential of disabled people and to raise $10 million for spinal cord research.

The wheelchair athlete is currently in Georgia as part of his journey up to the U.S. easter seaboard. By the time he completes his tour in Vancouver, he will have covered nearly 40,000 kilometres in 33 countries.

The Nova Scotia tour is expected to begin Sept. 6 in North Sydney. The route will take Hansen through Cape Breton to Antigonish and along the Eastern Shore to Halifax. The week-long tour will then proceed to Truro and Pictou as Hansen heads for Prince Edward Island.

District 17 County Councillor Harry McInroy, a member of a sub-committee formed to study a county contribution to the tour, said councillors agreed Halifax County should take a leadership role since a great portion of Hansen’s trip cuts through county land.

“We figure we should play a lead role in the Nova Scotia portion of the tour because so much of it goes through the county,” he said. “It’s also not a major expense from our point of view.”

The $4,000 will be put toward all of the tour expenses in Nova Scotia except for accommodations. Those have been donated privately.

Organizers prepare for Hansen’s arrival in N.S. on Sept. 10

Transcript:
Rick Hansen will wheel into Nova Scotia on Sept. 10, and provincial organizers are preparing to greet the globe-touring athletes.

Hansen, 28, has been wheeling around the world since March, 1985. His Man In Motion World Tour, to raise awareness of the disabled and $10 million for spinal cord research, will take him 24,901 miles through 33 countries.

Don Curren, provincial tour chairman and a paraplegic since the Second World War, said he is excited by the enthusiasm already shown in the province for Hansen’s efforts.

Mr. Curren, who met Hansen during the Pan American Games in Halifax in 1982, praised him as “a shining example” to all Canadians.

“He’s an outstanding human being, somebody who’s come up off the mat after being seriously disabled,” he said.

Mr. Curren said disabled people have needed an exemplary figure like Hansen for 40 years, but there has never been anyone else with the will and the strength to make as bold a statement as the wheelchair athlete.

“The tour is a great idea, but, unfortunately, it has taken 40 years to develop someone with the physical capabilities to do it. He has risen above the crowd,” he said.

Tour organizers will embark on a trip next week to begin inviting communities on the Nova Scotia route to stage welcoming and fundraising events.

Halifax County has already taken a major role in sponsoring the provincial segment of the tour. The county approved a $4,000 grant to tour organizers earlier this week to cover expenses for Hansen and his entourage while in Nova Scotia.

Elizabeth Chard, co-chairman for promotions and special events, said a number of major events will be staged to correspond with Hansen’s visit to the province.

She said she hopes to have a large welcoming event at the Halifax Metro Centre to highlight the provincial tour. She said a special events sub-committee is trying to arrange a dinner and art display in Halifax celebrating the Man in Motion theme.

Several provincial organizations and private corporations have already donated money to the tour. Canadian navy personnel will raise money for Hansen by running with the tour across the province for pledges.

Joan Williams, director of Canadian planning for the tour, said she was thrilled by the early show of support.

“From Nova Scotia, the response has been fantastic,” she said. “I came down to find out what’s been planned and I’m overwhelmed.”

Mrs. Williams said Hansen is healthy and in good spirits as he makes his way up to the eastern seaboard. He is now in Georgia.

She said he talks constantly about arriving back in Canada.

“I think it will be a huge relief to him,” she said. “He will see it as being close to home.”

Hansen, who was forced into a wheelchair as a result of a traffic mishap 13 years ago, will cover more than 500 kilometres on his swing through the province.