There is a great deal of media attention in K'jipuktuk (Halifax) and beyond with regard to public monuments, specifically, those that commemorate difficult or contested histories. Within the world of  public art, the concept of the “counter monument”—as it has been advanced by artists in post-war Germany — has provided a fertile terrain for art practice that engages in and contributes to these public debates. To understand monuments as contested sites is to debate their meaning and to accept that meaning is not fixed at the moment of a work’s creation, but will change over time and with new audiences.

In November 2020, a group of artists, curators and scholars of genocide and memory studies explored this idea of counter-monuments in the exhibition Speculative Cartographies - Mapping Five Unmarked Mass Graves in the Forests of Eastern Poland. This work is both a physical exhibition nested within the architecture of Halifax Central Library (November 2-9, 2020), and a permanent virtual exhibition that can be accessed here. This work was completed in collaboration with The Zapomniane Foundation, who research unmarked mass-graves of Jews murdered during the “Holocaust by bullets”, locations other than death camps such as forests, villages or rural areas.

Direct excavation is prohibited by Jewish Halacha (religious law), therefore all data about these sites are collected using non-invasive technologies such as LiDAR (Light Detection and Ranging), GPR (Ground Penetrating Radar), along with archival research and oral histories. The work that we created is dedicated to drawing out knowledge archived in landscape. Working with different ways of mapping that use data produced by non-invasive archeological tools, as well as 16mm film, traditional archives and subjective maps drawn from local oral histories, the works in this exhibition all engage in alternative approaches to memorialization. Material traces of violence recorded in the landscape simultaneously reveal connections between human conflicts and transformations of the natural environment. Explore the gallery below—all photos by Solomon Nagler. 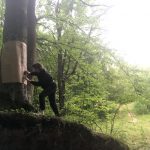 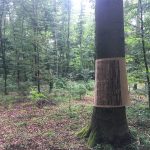 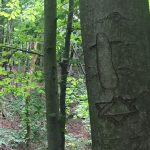 One of the most poignant forms of memorialization of the Holocaust are survivor testimonies. Many organizations such as the Azrieli foundation publish these stories and make them readily available at public institutions such as the Halifax Central Library. There are also publications of local survivor testimonies available at your local library including those of Simon Spatz and Philip Riteman. The recording and distributing these stories become more urgent as we consider the age of these survivors. Oral histories, specifically untold personal stories of how someone lived and survived genocide not only provides an important means of nurturing empathy and understanding, but also can create a unique form of memorialization that is embedded in the mind of the reader. With regards to our exhibition, the documenting and archiving of first-person accounts of witnesses to genocide contributes to both a documentation of personal encounters with the Holocaust, while also aiding in researching locating and eventual counter-memoralization of these unmarked mass graves.